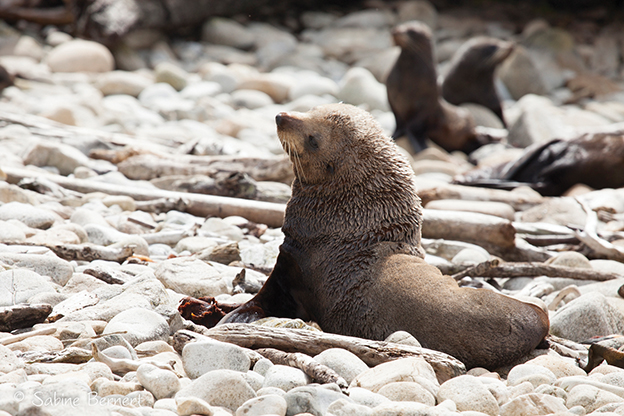 Last month there were three reports of dead seals and 28 reports of live single or groups of seals around the Hauraki Gulf. File Photo: SABINE BERNERT/DOC

Coming across a dead or dying New Zealand fur seal (kekeno) can be “distressing”, but the Department of Conservation is calling for such sightings in order to help the “cheeky” species thrive.
Over the next three months, residents around the Hauraki Gulf and Thames-Coromandel are being urged to report sightings of the seals, as part of a new research project that continues on the mahi of citizen scientist Shaun Lee.
In 2021, Shaun documented 57 kekeno deaths throughout the Hauraki Gulf Marine Park, most of which were juveniles. This was despite there being no known kekeno colonies in the park.
Since the project began last month, there have been three reports of dead seals and 28 reports of live single or groups of seals. “Of those 28, we have had two reported for Thames,” DOC’s marine science advisor Laura Boren told The Profile. “One was reported half-way between Whakatete Bay and Ngarimu Bay on the Thames Coast – a juvenile who is suspected to have been hanging out in the area for a few weeks.
“The other one was reported at the end of Wilson Street, Tararu, Thames, and was on the sea wall.”
While it was “refreshing” to get reports of live seals, Laura said it was also important for people to report deceased seals, so DOC could send suitable specimens for an autopsy to determine its cause of death.
“If we can try and get to [the seals] in a more timely manner, we can get a better idea of the timing of when they’re dying – if there are peaks and troughs – and it improves our chances of getting fresh ones that we can determine a cause of death for,” she said.
“If we do get fresh ones reported, we will follow up on those, and we’ve made arrangements with Massey University and Auckland Zoo to undertake some post mortems.”
The marine mammals are an increasingly common sight around New Zealand beaches in winter and early spring, as they “haul out” (come ashore) during their seasonal departure from breeding colonies.
Laura, who did her Masters on New Zealand’s fur seals, said while there had been work done to understand the mortality of kekeno in the past, there was less emphasis on the topic because of the species’ “success”.
“There is less known about these guys, but as the population increases and they overlap more with humans, there’s a stronger need to be able to manage the interactions between seals and humans,” she said.
“Because of human and coastal development [in the North Island], you get a lot more seals crossing the road and going into school yards and stuff like that… There are so many different ways that we can interact with them – dogs, rubbish, tourism – and as well as that, there are the indirect things, like fishing and impacting their food supply.
“I think the key thing, from my perspective, is being able to know where the animals are, where the hot spots are,” she said. “And if there are mortalities that could be food related or foul play, we can act on that.
“We can share the space, we just need to learn how to.”
The research project will continue until the end of September.
DETAILS: People who encounter seals can provide information and photographs by email to kekeno@doc.govt.nz. People should take photos of the whole animal from several angles, including one straight down the animal and with something for scale, and note the date, location, and if the animal is tagged.