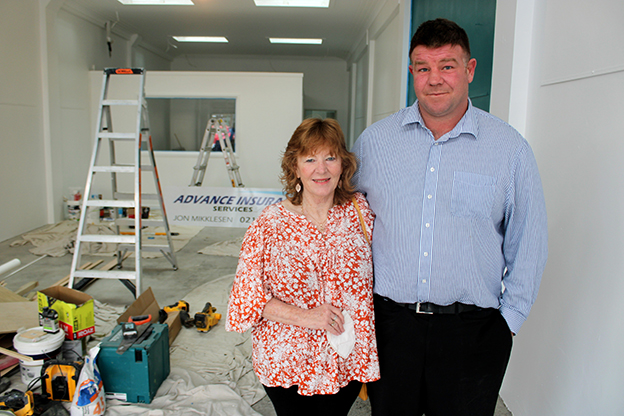 Wendy Mikkelsen and her son Jon await the completion of their refurbished art gallery and insurance offices in Paeroa. Photo: KELLEY TANTAU

As a fire ripped through the building next door, Wendy Mikkelsen and her son Jon desperately pulled down paintings displayed on the wall.
Above their heads, paint started popping off from the roof, and smoke pooled through a crack between the buildings.
“It all happened really fast,” Wendy tells The Profile.
She and Jon stand in their reconstructed Belmont Rd art gallery in Paeroa, where five months earlier, a fire completely gutted the neighbouring Forget Me Not op shop and damaged the nearby Bakehouse Cafe, Midway Burger Bar, Old Mate’s Pizza, and the Paeroa News Agents.
The gallery also doubles as the office for Jon’s business, Advance Insurance Services, and on the day of the February fire, both he and Wendy were on site.
“We tried to put it out with fire extinguishers,” Jon recalls, “but the smoke was covering half of [Forget Me Not’s] roof, it was thick and black, so we actually had to duck down underneath it to try and get into the kitchen next door.”
The fire broke out around 12.30pm on February 23, and emergency crews from Paeroa, Puriri, Ngātea, Te Aroha, Waihī, and Hamilton attended the scene. The fire, believed to have been caused by an electrical fault, was extinguished two hours later. Nobody was injured in the blaze.
Fifteen artists had work displayed in the Mikkelsen Gallery at the time, and although the building remained intact, smoke damage had forced the two businesses inside it to close.
Wendy and Jon shifted the artworks into the outside studio for safe keeping – but were soon hit with another blow.
In May, three months after the blaze, thieves broke their way into the studio and stole three hand-made ship replicas, and two mixed media sculptures.
“The ships were gifted to us from a family friend who was in his 80s and who made these beautiful, unique model ships,” Wendy says.
Her husband, Stephen, passed away from cancer in June, 2021, and the ships were pieces of particular importance to him. The theft left Wendy “devastated”.
But after going through her own health struggles following the fire, Wendy got a taste of good news – a “courageous” member of the public recovered the ships and returned them to the gallery.
The mixed media sculptures, one a cat and the other a fish made from wood, brass, and precious stones, remain missing.
As Wendy and Jon stand in their near-completed building, which has new floors, a new ceiling, a new front entrance, and a striking feature wall, they set their eyes on the future.
Jon, who has been working out of Wendy’s garage, will return to the office once the build is complete.
Before the end of the year, Wendy is also hoping to have a “grand reopening” of the gallery, as well as an exhibition.
“[The fire] hit me so hard… everybody else’s beautiful work that they had put their heart and soul into was under my watch. It was really daunting,” she says.
“So, we’re not going to rush it but… we want to do a grand opening with an exhibition and celebrate and thank the community. People were upset and giving us their condolences and that meant a lot.
“Everything has been out of our control,” she says, “and to have faith in the dark times, it does take a lot of grit… but it is life.”

Award for 20 years of search and rescue