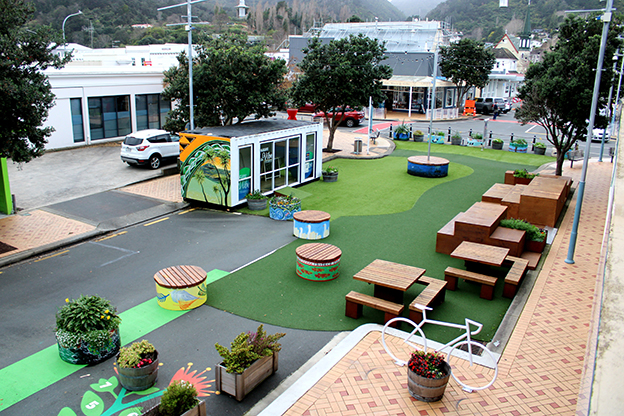 Thames-Coromandel District Council voted to buy a section of land adjacent to the Create the Vibe pedestrian space before public consultation began on the controversial project.
However, it will not say whether the land was bought as part of The Vibe despite a council report stating it would “land bank” the space for a plan to “transform the CBD”.
In the publicly excluded minutes of a May, 2019, council report seen by The Profile, council asked Thames Community Board members whether they were interested in purchasing 207 Mary St, a 269 square metre section of bare land next to the former Computer Geeks shop.
The report said purchasing the land was an opportunity to “land bank” for the revitalisation of the “heart of Thames” with “a strong emphasis on transforming east to west linkages to enable strong pedestrian and cycle connectivity between the mountain and the waterfront”.
Mary St was specifically identified as a key connector, and the purchasing of 207 Mary St was seen as an “investment” which would “help create a catalyst to transform the CBD”.
Council voted to buy the land in October, 2020, for $221,069, just prior to public consultation for The Vibe, with construction beginning in February, 2021. The cost of the purchase would be offset by council property sales within the Thames ward.
The Profile asked council if the purchase was made with the intention to expand the Create the Vibe space on Mary St, and if not, what was the intended use of the space.
However, council project delivery manager Andrew Boden did not answer the questions.
Instead, he stated the Create the Vibe project had been carried out within the Waka Kotahi Innovating Streets budget of $320,125, and did not include or utilise the lot at 207 Mary St.
The Vibe opened in March, 2021, with the intention to establish a shared pedestrian and cyclist space by “temporarily” closing Mary St to vehicles.
There are seats and tables, festoon lighting, bike racks, garden planters, and eye-catching murals – but the space also comes with opposition.
Business owners have criticised council’s lack of consultation, and scrutinised the public voting period that spanned just two weeks and didn’t include an option to keep Mary St as it was.
A petition signed by more than 600 calling for the street to reopen followed.
But in June this year, the Thames Community Board said the space was “heading towards permanence” – a process that Greg Hampton, owner of Carson’s Bookshop opposite The Vibe, has called “a sham”. “Still trying to deny that they purchased the land for The Vibe is dishonest, because it’s clear in the report. It may not say ‘Vibe’ but it’s the same thing. They’re trying to do a Donald Trump – just completely deny,” he said.
Mr Hampton filed an Official Information Act (OIA) request back in February, 2021, over council’s decision to spend $221,069 to buy the land. The information was withheld until a second OIA request was lodged by Mr Hampton in June, which included the 2019 report.
“What infuriates me the most about the whole thing is [council’s] consultation has not been genuine; they did not give the public an opportunity to vote for the status quo of leaving Mary St open, and they had already purchased the land and invested over $200,000,” Mr Hampton said.
“Upon presentation of a petition, the elected members wanted to discredit it, so they clearly do not want to listen to people who object with the closure of Mary St.”
At the Thames Community Board meeting on June 28, members Peter Revell and Sally Christie said they believed The Vibe was moving towards becoming a permanent space.
“We could consult until I’m older than I am now and we could still not have a clear way forward,” Cr Christie said. “In terms of myself, I believe that this space is crucial for Thames. I can hear and feel the frustration from people who want a bulldozer tomorrow… but I’m in the camp of we’re heading towards permanence, so, how do we do that best?”
Mr Revell said he felt the Vibe’s history was tainted by “missteps”.
“We all know the history that has got us to where we are, and that history is characterised by a lot of what I would call missteps; things that didn’t quite happen the way we thought they should happen, or weren’t planned in the right way…”
Then acting chief executive Bruce Hinson said council could “always do things better”.
“And I’m happy to take that on board.”
But Mr Hampton said the council had been “dishonest and deceitful” throughout the process.
“I would not have kept going on about this if they had just owned up and said: ‘We shouldn’t have done it that way’ and changed course.”