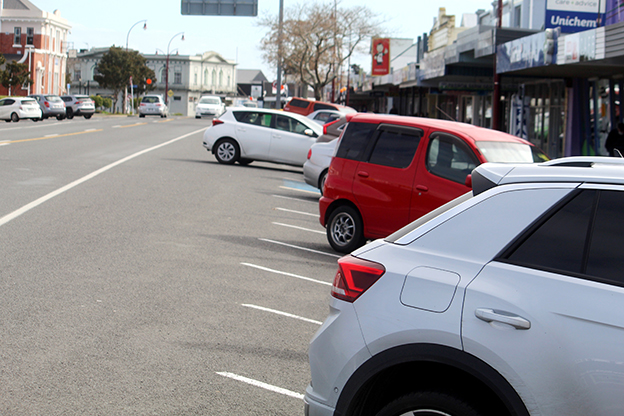 Paeroa’s main street will see parking time limits, but exactly where and for how long is yet to be confirmed by Hauraki District Council. File photo: KELLEY TANTAU

Where, and for how long, remains undecided, but one thing is certain: the countdown is on for parking time limits in Waihī and Paeroa.
While some submitters to Hauraki District Council’s traffic and parking bylaw said the proposed two-hour time limit for the main shopping areas of Waihī and Paeroa would rid the towns of their “relaxed atmosphere”, others called for the change.
And while staff will review the exact time limit – two hours, three hours, more, or less – and which streets they will extend to, elected members did decide to introduce the limits almost unanimously, with just Waihī councillor Brian Gentil opposing the limits in his ward.
In the proposed bylaw, the parking limits would be in place between the hours of 9am-5pm, Monday to Friday, excluding public holidays.
No time limits were proposed for Ngātea.
Margaret Kaye, owner of Books on Seddon in Waihī, welcomed the two-hour parking suggestion for Seddon St, but asked for it to be extended on to the adjacent Haszard St.
“From where I am, I can see a reasonable section of Seddon St, and also Haszard St, and I know the same cars are parked in almost the same positions day after day for a portion of the day,” she told councillors at the July 13 hearing.
“I also see cars driving round and round looking for a car park… we need to keep Waihī open for business and available for business, especially through winter – people shouldn’t have to walk from the top of Haszard St.”
Other submitters to the bylaw said one of the great differences of a small country town was the ability to park freely.
Another suggested two hours would be too short.
“If a family comes to town to walk [the] mine pit… then wants to have lunch at a local café, then perhaps look around the local shops, this couldn’t be achieved in a two-hour time frame,” they said.
“The thing people come to small towns for is a relaxed atmosphere, not one of time limits in town when shopping, or eating out, and enjoying local activities. Otherwise, perhaps they will keep driving to Tauranga to the malls, then everyone loses out.”
According to council, between May, 2019, and May, 2022, it received four service requests regarding parking in Seddon St, Waihī, and two service requests about parking in Paeroa’s main streets.
As well as this, councillors had received “numerous verbal complaints, particularly regarding Paeroa”.