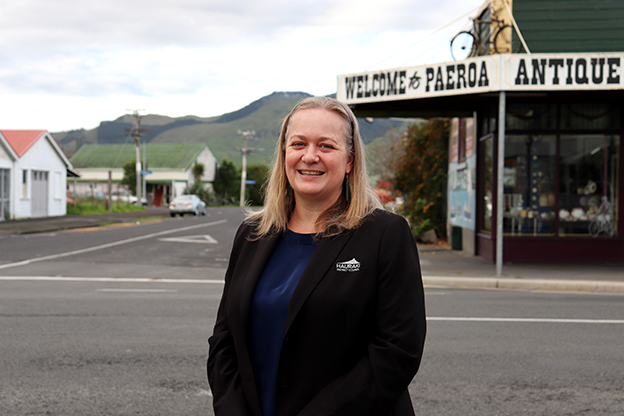 Michelle John’s radio career was not as fleeting as her stint in pageantry.
It was the early 90s, and Michelle was working as a nanny at the Goldfields Shopping Centre in Thames during the Miss Thames Valley pageant.
“I was about 17 at the time, and I did the pageant with [Kiwi supermodel] Kylie Bax – it was the year Kylie won,” she told The Profile. “She was so graceful walking down the catwalk, and I was ‘stomp, stomp, stomp’. I was just not graceful at all.”
During the pageant training, the contestants went across to Hamilton for radio interviews, and it was there Michelle was told she had a good voice for the medium.
“We did the pageant, Kylie won – which was a forgone conclusion anyway – and I thought about it afterwards and gave [the radio] a call.”
She started working for Coromandel FM, and while she never entered another pageant, her “fall” into radio lasted more than three decades.
It came to an end in March when she was made redundant from Coromandel’s More FM, where she was the breakfast host alongside Mike Plant.
“It was a bit of a shock to the system,” she said, “but sometimes change is good.
“I was brought up by a very strong woman, a solo mum, and we go way back, like five generations, within Hauraki and Thames-Coromandel.
“My mum’s always said to me: ‘If all else fails, you clean toilets’. So, I knew there was always going to be a job available to me because I’d be able to just do anything,” she said. “But there was that sinking feeling for a short time.
“I kind of was here forever, and even though I knew I’d get too old to work for Coromandel’s More FM, I still chose to move back to my roots, to live here for the rest of my life.”
After being made redundant, Michelle was contacted and supported by different people who opened her eyes to an array of other career possibilities, she said.
One of them was Toby Adams, Mayor of Hauraki District Council, and he encouraged Michelle to work for them in a new role as community advocacy officer, which Michelle said encompassed her passion for the towns she grew up in.
“One of the key roles is to find external funding sources for local community groups, organisations, sports teams, and clubs.
“It’s really good because it kind of coincides with what you do on the radio,” she said.
“You’re talking about people’s events and you’re talking with all these groups, and now with HDC, the role has evolved into helping them within their club or organisation to find some funding out there and help them do what they do.”
Michelle can also still be heard on the radio, after Coromandel’s CFM invited her to have her own Saturday morning show from 8am-1pm.
The combination of roles was a perfect marriage of past and future. “I just want to keep doing what I’m doing now, day-in and day-out,” she said.
“Meeting new people, helping them out, and advocating for the little people in our region who do big things.”