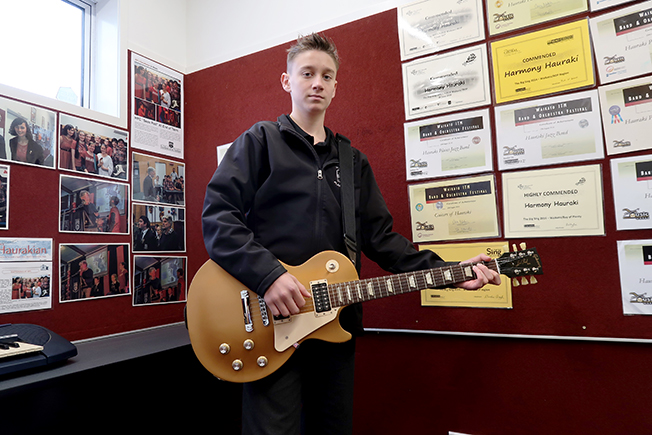 HPC muso Jacob King has written a song that is one of the Top 20 in the Youthtown Songwriting Competition. Photo: SUPPLIED

Busking on the streets of Waihī and performing in his family’s restaurant has paid off for teenage singer-songwriter Jacob King.
His song, Can You Hear Me?, has been selected as one of the Top 20 of the Youthtown Songwriting Competition, run by Play It Strange.
He will now record the song in a professional studio, and it’ll be released on the national Youthtown album.
Jacob, 14, said he was excited to be a finalist in the competition – the first the Hauraki Plains College muso has entered.
“I’ve been doing music for about five years now and I’ve written some other songs.
“So, when I heard about this competition I thought, I may as well give it a try.”
His parents, Emma and Brad King, own The Falls Retreat in the Karangahake Gorge, and playing his music at the restaurant and along the streets of Waihī has boosted Jacob’s confidence.
“I didn’t used to have a lot of confidence but busking and playing in the restaurant has given me more,” he said.
“I’m the only musical one in my family, and my mum always said I was obsessed with music from a really young age.”
Jacob plays the guitar in his track, and said Can You Hear Me? is about young people feeling like their opinions are not being heard.
He encourages other young musicians to “go for it”.
“Always practise – but it’s okay if you don’t do it for a week or so, but just make sure you go back to it otherwise you’ll lose your talent,” he said.
DETAILS: The 20 finalist songs will be recorded and mastered for the 2020 Youthtown Songwriting Competition album which will be available for free download and streaming on the Play It Strange website: playitstrange.org.nz

Two years in SPCA for Sam the Kelpie