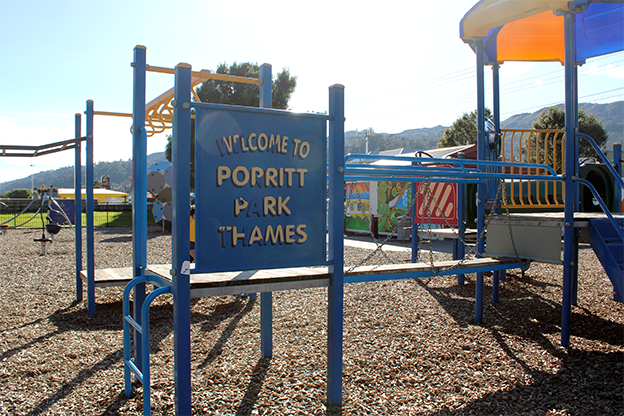 Thames is set to get its own Destination Playground at Porritt Park in 2023. Photo: KELLEY TANTAU

Move aside Hamilton, it’s Thames’ turn to get its very own Destination Playground.
The innovative playgrounds, often seen in bigger centres like Hamilton and Auckland, are different to traditional playgrounds in that they provide more creative and challenging equipment.
They also typically come with a million-dollar price tag.
But Thames’ state-of-the-art and accessible jungle gym will be majority-funded by philanthropists, who have asked to keep their identities a secret.
Thames Business Association chief executive Sue Lewis-O’Halloran told The Profile, it was an exciting development for Thames, one that will see families travel to utilise it.
“We’ve never done anything quite like this, and we’re really excited to do it.”
The Destination Playground will be located in Porritt Park, in between the skate park and Thames Citizens’ Band Hall on Queen St.
It has the potential to include water play, flax weaving, barbeques, swings, and wheelchair accessible features.
“A playground should be for everyone, all ages and stages, regardless of their physical abilities or disabilities,” Sue said.
Also coming with the playground is “the Rolls-Royce of bathrooms”: a Changing Places bathroom facility that will meet the needs of people who cannot use standard accessible toilets.
It will be the fifth of its kind in the country, Sue said.
“It’s a huge deal and because there are so few of them in New Zealand, there will be families that will travel here to use them.”
It is hoped the transformation of Porritt Park will take place in early 2023. The project has the support of Ngāti Maru and Thames-Coromandel District Council, with the latter committed to maintaining the space, Sue said.
“How often do we all get to work together in a positive, collaborative way? That’s one of the most exciting things about the project,” she said. “Everybody is keen.”
Across in Hamilton, there are eight Destination Playgrounds. The city’s Hamilton Gardens and Dominion Park playgrounds had a $1m budget, including associated facilities such as toilets and car parking.
Hare Puke Park, in the suburb of Flagstaff, also cost $1m and was built in 2018.
While Sue would not disclose the budget for Thames’ playground, the donors would provide “the bulk” of the funding, which meant there were fundraising opportunities within the community.
“The more the community raises, the more we can do in terms of equipment and enhancements to the playground,” she said.
“We’ll be starting with each of the schools in the Thames ward, inviting them to give us an idea of what they’d like to see in the playground… we’ll also be meeting with community groups and local businesses to get their support and input.
“It’s so important that everyone has a say in this amazing project.”