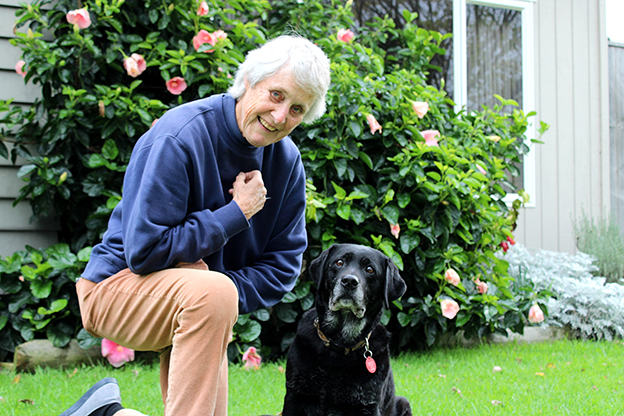 Tui’s pedigree name is Merry Maker, and it’s a name that “suits her very well”, her owner says.
In fact, the black labrador’s tail wags so much that it often knocks over the signage during the Rally-O competitions she takes part in. Now, there’s even more to wag about.
Tui has been named a national grand champion in Rally-O, a timed obedience challenge that the 12-year-old lab takes part in with her Ngātea owner, Sally Felton.
“Yes, she’s stiffer than she used to be… age is showing with her, but there’s no stopping her at this stage,” Sally told The Profile.
According to Dogs NZ, during Rally-O, a dog and their handler are required to perform a different exercise every few metres, including combinations of turns, changes of position, heeling around cones, halts, and jumps.
The goal is to gain a score of at least 90 per cent to earn a qualifying certificate, and once a pair has enough certificates, the dog can gain a Dogs NZ Rally-O title.
There are several levels of title to work towards, each level more challenging than the last, with longer courses, more difficult exercises, and a stricter criteria for success.
“[Tui] is in the advanced and the excellent classes, the highest in Rally-O, so she had to have 100 [points] in all of them,” Sally said. “She had to get 10 match-ups of 100 [scored] certificates to get to grand champion, which was very hard work, but she did it in the end.”
Tui is known for her merry presence throughout the Rally-O circuit, and has even won a spot prize for being the happiest dog in the competition.
Sally puts it down to teamwork.
“She likes doing anything we do together. She’ll follow me around just to see I’m not going to go out and leave her,” she said.
“For me, it’s a competition that keeps me awake and thinking… and we get to do it together.”
The call was made by Dogs NZ for Tui to be named a grand champion on April 30, after years of rising up the ranks alongside her younger sister, Merlot, who is 6.
“There is not a heap of grand champions,” Sally, a former vet nurse, said.
“It really comes down to people who go to enough competitions to get the certificates. You have to make the time to do it.
“I had to work around where I could find the Rally-O competitions, and in between lockdowns I went down to Levin, to Rotorua, to Taupō, because I needed to find ones I could go in for.”
As a youngster, Tui was put through basic training with Netherton dog trainer Christine Nielsen, who Sally said was “brilliant”.
However, now she’s grand champion, Tui is not going to rest on her laurels.
“She’d get most upset if I left her out of things,” Sally said.