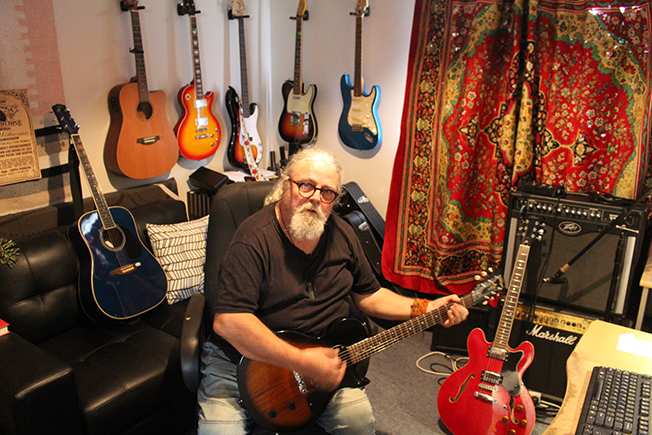 A debut performance in New Zealand where he met his current partner amped Paeroa musician Wayne Morrison to move across the Tasman ten years ago.
The former Melbournian, who’s been involved with country and blues music for over 40 years, told The Profile he had moved to New Zealand after he was invited to play at the 2012 Bay of Islands Country & Rock Festival by his friend and Thames country music singer, Craig Robertson. The festival was also where he met his partner Jill Dobson.
“[Craig Robertson’s] manager rang me up and he said Craig wants you to come to New Zealand and go to this festival and I said nah, I’ve got no interest in it, and I’d never been to New Zealand,” he said.
“But his manager said I’ll pay for you to get a passport and pay for your airfares so I flew over and stayed with Craig. We went up to Paihia and I played there and that’s when I met Jill standing in a little bar in a corner on her own and bopping away.
“We got together… I went back to Tamworth… Jill then actually came to Melbourne to meet my family and they all loved her and she loved them.
“So then I got my gear together and moved over here with her… we lived in Glenbrook, Pukekohe, Hunua and then we thought let’s buy a house so we came to Paeroa.”
Wayne, who has written more than 100 songs, said Jill provided the inspiration for one of his hit singles called My Time With You, which has been heard over radio airwaves in Australia and Europe.
“It’s a sweet old country western tune… I was just sitting on the couch with my acoustic, which I do a lot, and I just have this tune and I thought oh that’s a nice melody,” he said.
then I’ll think of something and I’ll go my time with you… got the gist of it and then I wrote it for Jill,” she said.
“Other times I dream a lot of stuff, which is funny because apparently that’s how Paul McCartney wrote Yesterday, he dreamt about it.
“I can hear lyrics or see myself on stage or a tune or something will come along.”
Wayne said he’d been open to recording music demos for locals with many who played country music.
“With my studio because I’m a one man band, if anyone wants to record they can come in and play,” he said.
“If I’m recording I’ve gotta be open minded… like I’m working on a track for a friend of ours from Waihī who’s a singer and she does country stuff so she’s written a song which I’ve produced and I play all the instruments on.
“I’m just faithful to that song, so I make it sound how she wants it.”
Wayne said he had played live music at the Thames Workingmens Club and The Junction Bar before Covid-19, and would be keen to return but was currently focused on recording new music.
“I’ve got a lot of ideas, no gigs at the moment… if I play once or twice a month I’m happy. But I’d rather record, I love recording and sitting and playing with my guitar,” he said.
DETAILS: Wayne’s single My Time With You is avaliable online at: blueshamrockmusic.com/product/wayne-morrison.