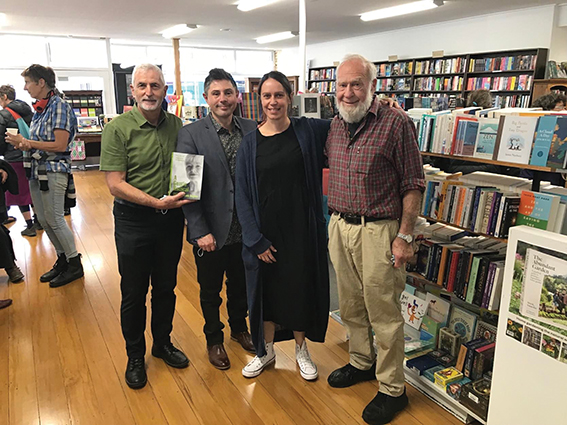 More than 70 people attended the launch of the biography of Jeanette Fitzsimons, a former Coromandel MP, environmentalist, and “trailblazer”.
Held inside Carson’s Bookshop in Thames on June 5, the launch of the biography – A Gentle Radical – brought together those connected to Jeanette, including her husband Harry Parke.
Harry shared fond memories of their love, life, and adventures together, and said it was interesting to read other people’s memories and experiences of Jeanette in A Gentle Radical.
“I hope you really enjoy reading it. It’s great to see… so many people I haven’t seen for quite a long time,” he said.
Jeanette was the co-leader of the Green Party of Aotearoa New Zealand from 1995 to 2009, and a member of parliament from 1996 to 2010. She was the first and, until recently, the only Green MP to win an electorate seat.
Jeanette, who once polled as the most trustworthy party leader in New Zealand, died suddenly from a stroke in 2020, aged 75 years.
Carson’s Bookshop owner operator Greg Hampton called her “trail-blazing”.
“Jeanette was, of course, very special to this community and the first green politician to be elected by an electorate in the world – what a substantial world contribution that is,” he said.
Author Gareth Hughes provided his insight into the purpose of the biography, stemming from a sit around chestnut trees more than a decade ago. “One of the initiatives I started was a summer camp at Harry and Jeanette’s farm back in 2007, and sitting around the chestnut orchard with generations of young Greens from all across Aotearoa… Every year Jeanette and Harry would tell the story of the Green Party, and the story of the campaigns.
“They’d tell stories about negotiating with Helen Clark, entering the alliance, stories of leaving the alliance, stories of the great campaigns… and that’s what I wanted to [do], with her tragic and sudden loss, to record those stories.”
Gareth said the book was dedicated to Harry, who, in his own right, was “a legend”.
“He pushed Jeanette forward and nominated her to be the first female leader of the Green Party, and Harry is a wonderful individual; I want to acknowledge him.”