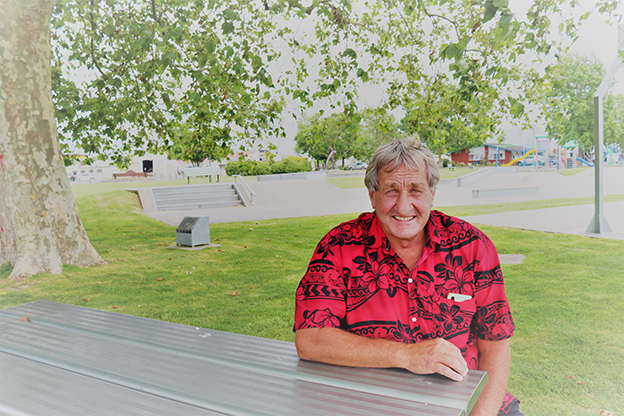 Friends farewelled a man with a great sense of humour, children gave thanks to a “supportive, strong, and stubborn” dad, and a wife said goodbye to the love of her life.
Everyone in the room hoped Rodney Garrett, who passed away on June 6, would be enjoying a well-deserved bottle or two of his favourite brew after a hard-fought battle with cancer.
A celebration of his life attracted a capacity crowd at the Ngātea War Memorial Hall where splashes of red – the colour for the Kerepēhi Bowling Club he was so avidly involved in, and the colour of his favourite brand of beer that sat atop his casket – could be seen among the crowd.
“You fought hard and gave your absolute all,” his daughter Jenna said. “We are so, so proud of you. I hope the fridge is stocked up for you up there.”
Rodney was born on August 17, 1961 to Rowan and Vivienne Garrett. He attended Kerepēhi School until 1974, and went on to Hauraki Plains College, representing the high school in a number of sporting codes, including as goalkeeper for the first XI soccer team.
Throughout his life, he dabbled in an array of jobs, starting as a farm hand before moving on to work at Toyota Thames, Linn Motors Paeroa, and the Hauraki Catchment Board.
He earned his bar managers licence and worked at the Hauraki Tavern, before establishing his own business: Advanced Cleaning Services.
He was a qualified Thames Valley rugby referee, and in 1982, he joined the Kerepēhi Bowls Club, eventually holding secretary and president positions. In 2018, he was bestowed a life membership, and was instrumental in the club’s expansion project. He was a Thames Valley outdoor bowls junior and senior representative, and in 2005 he became a Thames Bowling Club member. He was soon nominated for president, and retained that position for a historical 10 years.
In 2018, Rodney was a part of a group that reinstated the Anzac Dawn Service in Kerepēhi.
In 2019, he was elected as a Plains ward councillor for Hauraki District Council. Two years later, he was diagnosed terminally ill with cancer and given six months to live.
It was news his family said turned their lives “upside down” but together they prepared for a “courageous” fight.
Fellow Plains councillor Ross Harris and Hauraki District Mayor Toby Adams said they were amazed at Rodney’s ability to continue his work as a councillor with “gusto”.
“Our last conversation was not even a week ago, and we were talking about our speed management plan, and for the last three years he’s been in everyone’s ear about the speed by the school and marae in Kerepēhi,” Ross said.
“As I went to walk away, he looked up and said in a soft, gentle voice: ‘I want you to fight for what I’ve been fighting for’ and I will.”
Rodney was the dearly loved husband of Philippa, the much loved dad of Jenna and Ricky, Larissa and Fish, and Owen, and the granddad of Zayden, Braxton, Flynn and Ayla. He died aged 60 at his home surrounded by family and was laid to rest at the Kerepēhi urupā.

A toast to Paeroa’s ‘pizza man’