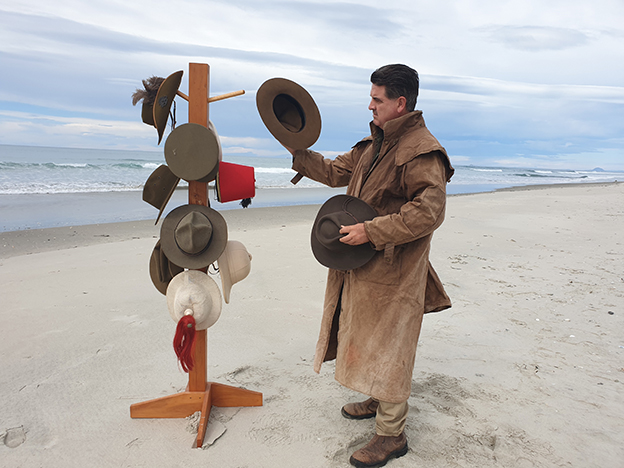 Mark Wright will premiere his play ‘The Gallipoli Monologues’ at Waihī this weekend. Photo: SUPPLIED

An upcoming play that gives a voice to the many faces of Gallipoli was inspired by an improvised monologue at a Waihī acting workshop.
Actor Mark Wright, who has starred in almost 40 different television series including What Now and Shortland Street, was hosting an adults’ acting workshop back in 2021 with the Waihī Drama Society when he performed an off-the-cuff monologue inspired by WWI.
The performance was well-received, with audience-members encouraging Mark to turn it into a play.
“A number of them came up to me and said I should write it down and turn it into a play, so that had been banging around in my head… I thought we were over Covid then, but last year we went back into it and [the play] went on the back-burner,” he said.
After being asked by Hauraki District Council to be part of an Anzac Day video series, Mark, an “amateur historian” performed a draft of his show at a “work in progress” evening in which audience members could provide feedback. He was spurred on to finish the play, and it will now have its premiere on June 11 at the Waihī Boyd Road Theatre.
“I want the piece to be engaging and entertaining, but also historical,” he said. “It’s putting humanity back into the facts and the figures. When you’ve got someone on-stage, live, speaking as a character as if they’re there, I think it brings it home because people can relate.”
Mark is an accomplished improviser and has been a regional, national, and international theatre sports champion, representing New Zealand at improv competitions around the world.
He said the one-man play contained nine monologues based on different characters, symbolised by him changing hats throughout the production.
“I’ve been consuming a lot of verbatim accounts, letters, stories, and have read a number of books… and how I write [the monologues] is I pick a character in my head and basically improvise,” he said.
“When it’s fresh, I will do it again and record it on my phone, type it out, and edit it.”
Mark’s great-grandfather was the proprietor of the Rob Roy Hotel in Waihī, while two of his great uncle’s served in Gallipoli, returning to New Zealand injured and dying shortly after WWI due to complications from their wounds. In 2014, he fronted a documentary series which saw him complete a “life-long dream” by travelling to Gallipoli and the Anzac Cove in Turkey.
“[The play] is a bit of a roller coaster of emotions. Obviously, we’re dealing with a massive tragedy that has a massive impact on New Zealand to this day,” he said.
“The people are gone but the families live on, and it’s important to keep the memories alive.”
DETAILS: The Gallipoli Monologues, Saturday, June 11 at 7pm, and Sunday, June 12 at 4pm, on at the Waihī Boyd Road Theatre. Tickets $30 at Waihi Stationery. If the June 12 matinee sells out, a second evening show may be added.

100 games in pocket ahead of cup clash