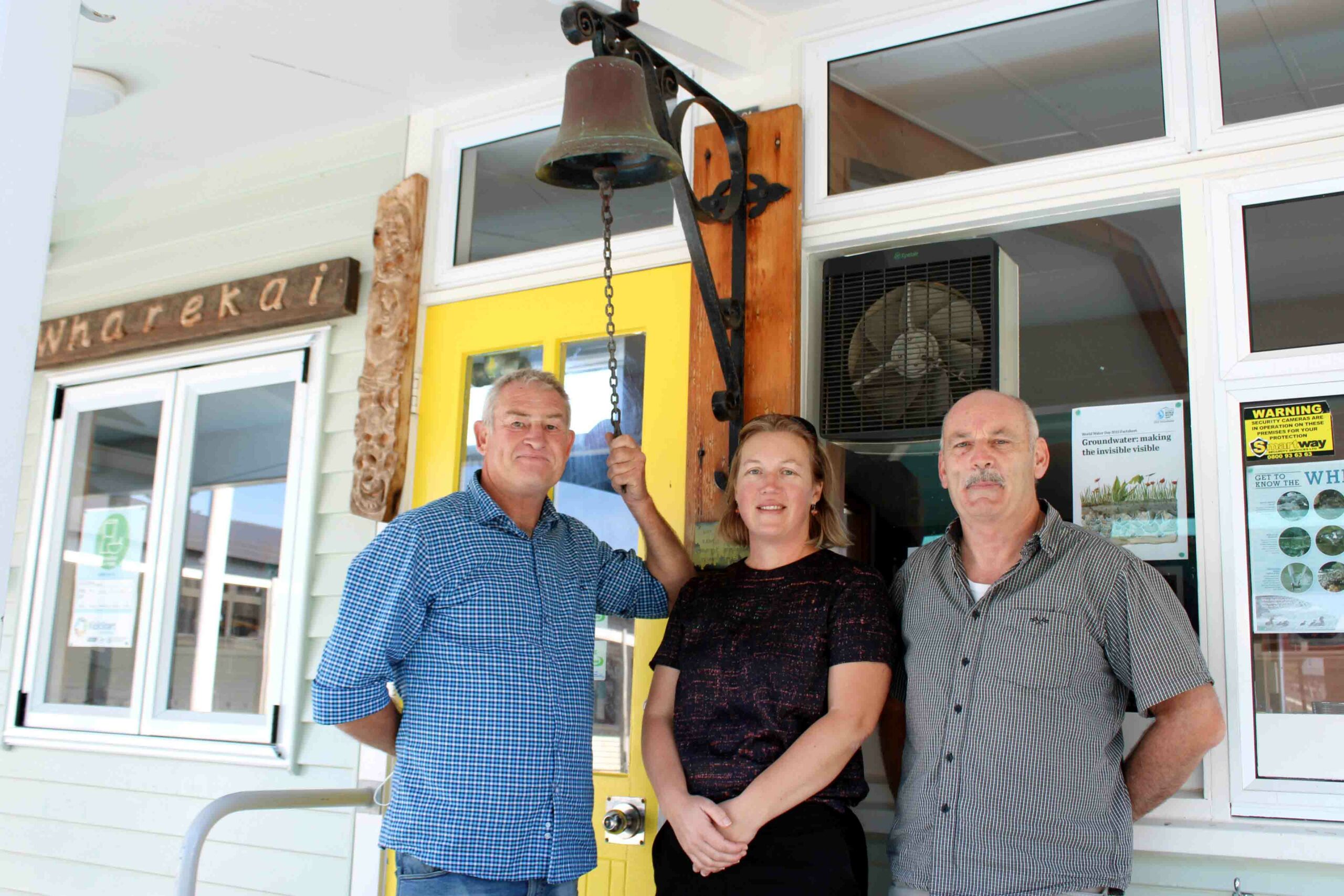 Reflecting on where Moanataiari School has been and where it is going is a “thrilling” opportunity for those ready to celebrate its reunion later this year.
The Thames school was born 50 years ago out of the closure of three other schools in the town.
Old Thames North School, – formerly Tararu School – Thames Central School, and Kōpū School were in need of repair and were to be replaced by one new school on a five acre site at Moanataiari Flat.
The education board decided to call the new school Moanataiari after a parent vote on various names. It originally had nine classrooms, an administration block, and a dental clinic.
It opened on February 2, 1972 with a school roll of 312 students, increasing to 331 students after the first term.
The official opening was held on May 27, 1972 and was opened by Honourable HL Pickering, the then-Minister of Education.
According to newspaper reports from the time, word of a new school was met with “elation” by the staff, who had been working under “difficult and outdated conditions” for years.
“A new school is more than due,” said the headteacher of Thames Central School, Mr L.D McIntyre.
His school had dropped a grade when its roll fell to below 270, but with the growth of the new Moanataiari subdivision, there would be “an increasing number of children in the district” and the roll was likely to be back near the 300 mark in the next two to three years, he said.
“If we can get the roll back to more than 270 from the present roll of 261, we will have a better grading which will be of advantage to the district.”
Mr McIntyre said as far as he was aware, the new Moanataiari School would be the first in the North Island to have all of its classrooms fully carpeted.

‘BIG, FANCY SCHOOL’
Thames man Allan Judd was a foundation pupil at Moanataiari, and is now the chairman of the school’s 50th reunion committee.
His three older sisters went to Central School, and he followed in their footsteps even though he was living “200 metres” from Tararu School at the time.
“Eighteen months later, this [Moanataiari] school opened,” he told The Profile.
“At six-and-a-half, you’re pretty impressionable, and we came here and thought: ‘Wow, what a big, fancy school this is’.
“We had come from a rickety, old, wooden building that creaked in the middle of winter and was cold, so coming here where there was central heating and we didn’t have to worry about burning our hands on the pot belly… it was little things like that; that was a big change.”
The school’s current principal, David Brock, said back in the 70s, the Moanataiari area was a bit like “nappy valley” – where all the young families came to live.
Since then, Thames had lost a lot of industry, he said, and the current roll now sat around 136 pupils. However, the school was a “microcosm” of New Zealand, made up of students with either a Māori whakapapa, NZ-European background, or Asian, Indian, and European ethnicities.
“It’s a very cosmopolitan type of school,” Mr Brock said.

A STEP BACK IN TIME
In August last year, the school’s staff unearthed a time capsule that had been underground for more than 20 years.

Desperate to find the capsule ahead of the school’s 50th reunion, to be held this September, office and project administrator Julie White set out on a search that involved using social media to track down past principal Mike Rzoska – who pinpointed them to the right location.
The school’s caretaker Brendon Arnold got digging, and eventually pulled out a white tube with writing on it that said: Moanataiari School, December 16, 1997.
After 24 years in the earth, the tube had sustained some water damage, but some of the objects easily identifiable were old school badges, classroom photos, a Hairy Maclary calendar, and a Telecom calling card. There were also cassette tapes and a yo-yo.
Mr Brock said what was intact would be put on display during the reunion weekend, but there were other items identified that had an even larger flow-on effect.
For example, the school’s current houses were named after birds, but originally, it was discovered they were named after waka.
“We’re actually looking at the school reverting back to the waka names because not only were they originally the names that were used within the school, but they also link us to manawhenua, and probably if we had not dug that up, we might not have known that,” he said.
Mr Brock also wanted to track down any of the carvers who had a hand in designing the school’s gateway.
The original gateway came from Kōpū School, which was gazetted as a Māori school in 1883, and had since been returned to iwi, but Moanataiari was interested to know the meanings carved into the new gateway, put up in 2007.
There were also original aspects that remained at the school, such as the swimming pool, while underneath the astroturf was the initial asphalt for the basketball courts.

DRIVE TOWARDS DIGITAL AGE
“In education, we’ve seen some significant changes. Clearly, there’s more of an emphasis on health and wellbeing, and teachers are more sensitive to those sorts of issues and the underlying needs of a child,” Mr Brock said.
“We’re also more culturally responsive, but in saying that, there were things that were in place here previously that were quite important.”
Mike Rzoska was the principal at Moanataiari from 1993 until December, 2007. This was the start of the “computer age”, he said, in which basic curriculum such as language, maths, and science was enhanced through the use of technology.
“At that time, Moanataiari School established a digital learning centre as an adjunct to the school library using Apple computers.
“This innovation was a first in the region,” he said.
“A positive outcome was that everyone was learning together the possibilities available through information technology. In latter years, the technology was incorporated into individual classrooms. This development necessitated that fibre be installed throughout the school – a first for schools in the area.”
Mr Rzoska said successive Boards of Trustees supported the drive towards the digital age, and without it, the school’s vision would have “languished”.
However, nowadays, technology was a “double-edged sword” which required the school to tackle the issue of declining interests in numeracy and literacy head-on.
Mr Brock was aware the two subjects had become a “challenge” in education, due to the use of technology outside the classroom.
“One of the things we’re having to counter is, although it is useful, technology sometimes gets in the way of children experiencing books,” he said.
The school has therefore committed a “substantial” amount of time, energy, and funds into adopting programmes such as Better Start Literacy, The Writer’s Toolbox, and Pr1me – all of which have been “very successful”.
“Technology is a double-edged sword, because what we’re getting out of the [Writer’s Toolbox] programme are students really engaged in their writing.
“One little boy who wasn’t interested in writing for some years all of a sudden is experiencing instant feedback…and it’s making a huge difference,” Mr Brock said.
“Mathematics has also become quite enjoyable for the kids… and we’re anticipating going forward that these programmes will make a huge difference to the ability of children to cope more effectively at secondary school.”
A WELCOME REUNION
It’s an interesting and oftentimes humorous perspective for the likes of Allan Judd, who commented that he used to use a slide ruler at school before calculators were introduced in 1982.
“It’s a great thrill, actually,” he said, “having been away from Thames, to come back and to see the school so well-established and doing as well as it is.”
With many of Moanataiari’s students coming and going from the town over the years, the school staff were excited to welcome past pupils and teachers back for its reunion, running over the weekend of September 23-25.
“You do wonder what’s happened to so-and-so,” Mr Brock said. “Some kids you’ve got an idea that they have huge potential and could make something of significance in their lives.”
One of those students, Gael Nagaiya (née Robinson), became a Silver Fern and will be a guest speaker during the reunion – which was to be held in March but postponed due to Covid-19 restrictions.
“We’re on track now, though it has been tricky with the different [traffic light] settings,” Mr Brock said. “The committee was quite smart and looked at it last year and said: ‘If we’re at such a level, we’d look at postponement’.”
Alongside Allan Judd, the Moanataiari School 50th Reunion Committee is made up of: Julie White, Kirsty Bain, Eileen Bain, Tracey Michelle, and Rita Moore.
DETAILS: Moanataiari School 50th reunion, September 23-25. More info: Ph 07-868 6504.