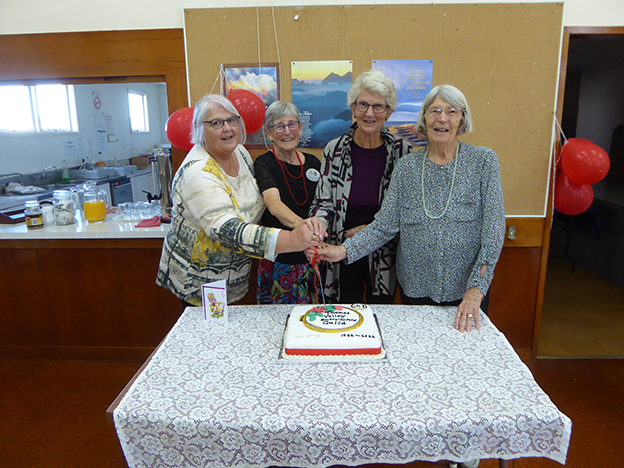 The 40th anniversary of the Thames Valley Embroiderers’ Guild will be marked by an exhibition displaying needleworks of all kinds, all techniques, and all colours.
April, 2022, marks the ruby anniversary of the establishment of the guild, which has a permanent home at the St James Centre in Waihī.
Before settling down at the centre, the guild – which ecompasses members from Waihī, Paeroa, Thames, Ngatea, Te Aroha, and even Katikati and South Waikato, moved around the region. It was in 2018 when membership had grown to more than 70 when the guild found its home at the centre.
Some of the guild’s highlights throughout the years include: the creation of a panel for the Tapestry Trust, which now resides in Dunedin; the involvement of the stitching of Shakespearian-themed curtains for the Globe Theatre in Hamilton; a large stitched paua piece which was a mosaic of pieces stitched by 18 members of the guild; and a Tunnelling Company Cloak created for an Armistice event, featuring all the names of the Waihī tunnellers.
On April 9, the guild held its 40th birthday at the St James Centre, and members celebrated with a cake cutting. They also announced the winners of its Ruby Challenge Embroidery Competition.
The guild’s exhibition will showcase the pieces from the competition, as well as creations made by the members over the past couple of years.
DETAILS: The Thames Valley Embroiderers’ Guild’s 40th anniversary exhibition will be held at Waihī Museum from April 26-30, 10am-3pm (closes 2pm on Saturday).

The diamond years of Kaihere Cricket