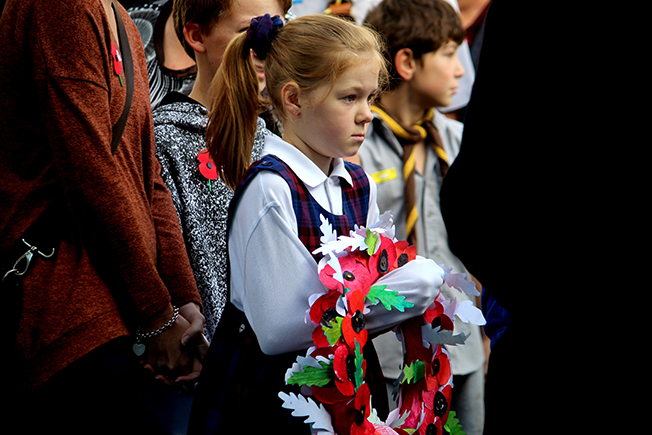 There will be no Anzac parades in Hauraki this year. File Photo: KELLEY TANTAU

Anzac Day civic parades around the Hauraki have been cancelled to mitigate the spread of Covid-19, despite there no longer being limits on numbers of people for outdoor events.
Hauraki’s public commemoration parades have ordinarily been held in Paeroa, Waihī, Ngatea, and Kaihere/Patetonga every year on Anzac Day, April 25.
However, Hauraki District Council made the “difficult” decision to cancel its civic parade events in light of the Omicron outbreak in New Zealand.
Dawn services, and other services run by each town’s respective RSAs, will be able to continue under each RSA’s judgement.
The Thames civic parade will be held as usual in Pollen St at 9:45am, followed by a 10am service.
Hauraki district Mayor Toby Adams said having to cancel civic parades was “a crying shame”.
“We know that Anzac brings out some of our most vulnerable members of the public, and we didn’t want to put them at risk,” he said.
However, case numbers in the Hauraki, which sat at 285 active cases on Sunday, were a factor that led to the decision to cancel.
“We made the call quite early on and contended with: have we got enough time to get some road closures in place? But nothing has really changed as far as a health perspective… the health risk is still too great,” Mayor Adams said.
Waihī RSA president Ellen Henderson believed the council had made the decision to cancel its civic parades too early, and possibly should have waited another four weeks.
She invited people to attend the Waihī RSA’s service at 11am on April 25, where they would be having a small parade around the building, followed by lunch.
In a report presented to council at its meeting on March 30, around $11,908 is spent on traffic management costs on Anzac Day – based on last year’s services and parades throughout the district.
Around $4660 is also spent on setting up town halls, band services, advertising, and wreaths.
With that in mind, councillors decided to donate $1500 to the three RSA Poppy Day Appeals in the district – at Hauraki Plains, Paeroa, and Waihī.
They also voted to allocate up to $1500 to work with actor Mark Wright on a video commemoration in lieu of the cancelled services.
The video will include writing and recording a series of Anzac-related monologues, and working with the local RSAs to record videos from returned servicemen and other members.
The video would be for use on council’s online platforms, and be funded through existing budgets.
Last year’s civic parades were able to run as planned, but when Covid-19 first arrived in New Zealand in March, 2020, all Anzac Day services around the country were cancelled. The national Poppy Day appeal was also postponed for the first time since 1922.
This led to people “standing at dawn” in their homes or at the end of their driveways – an act Mayor Adams said was “one of the most memorable services we’ve had”.