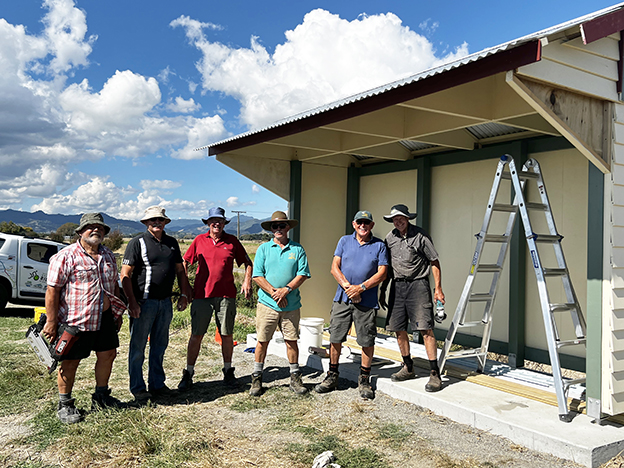 Five Rotary clubs are involved in building sixteen new Hauraki Rail Trail shelters, with the first one put up in Miranda. Photo: SUPPLIED

Rotary’s new Hauraki Rail Trail shelters will soon provide a place for riders to rest on their journey.
The 16 new railway station-designed shelters are a centennial project by five Rotary Clubs, including Thames, Paeroa, Te Aroha, Morrinsville and Matamata, and will include long bench seats, station names and interpretations of community stories.
The shelters will be located every 10km on the full length of the 197km trail.
Rotary Thames president Warren Sly said he came up with the idea to build the shelters in 2020 after riding the trail in 2019.
“I noticed there was no shelter and thought it would be a worthwhile project for Rotary to look at providing some shelters. So I put a proposal together and put it to the Hauraki Rail Trail Charitable Trust, and they were very happy with the concept,” he said.
“We’ve tried to make the project as inclusive as possible. Iwi are looking at decorating the shelters, gardening groups are looking at planting natives around the shelters, and we’re approaching primary schools to adopt a shelter.”
Hauraki Rail Trail Charitable Trust chief executive Diane Drummond said she was “absolutely thrilled” with Rotary’s community partnership for the shelters.
“There’s been a lot of feedback over the years for a need for shelter,” she said.
“It’s a long trail and we have long, hot summers… and [Rotary] came to us with a solution, which is just what this trail is all about, it’s all about community.
“We worked with [Rotary] to actually look at something that was trail wise and then the Ministry of Business, Innovation and Employment (MBIE) came in behind them and supported that.
“We’ve currently raised $185,000 and are looking for additional funding to complete them all but we’re certainly well on the way.”
Rotary Thames raised around $35,000 for the project.
Diane said Rotary began building the shelters 18 months ago and after some delays, they erected the first one six weeks ago at Miranda on the trail’s Kaiaua to Thames section.
“All going well we’re on target to have the first eight done probably by the end of June,” she said.
“[Rider] numbers are growing… and trails throughout New Zealand are absolutely booming.”