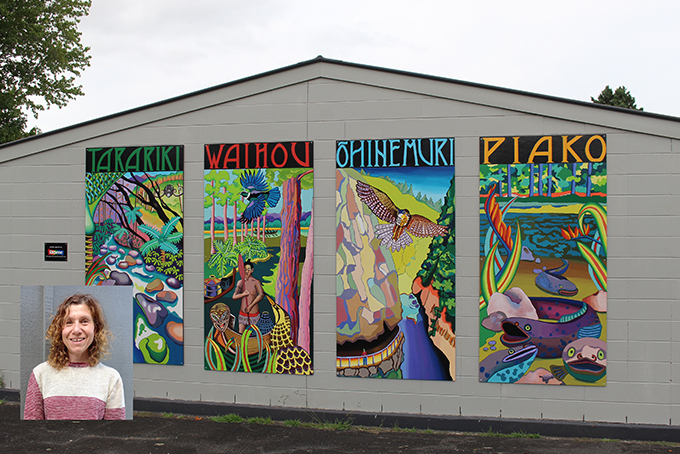 A Waeranga artist said she was “shocked” but “excited” when she won first for one of her murals in a national competition.
Claire DuBosky’s mural at Paeroa Central School won first place in the 2021 Resene Mural Masterpieces competition, announced in December.
Claire said she’d hoped to win first place after getting two third equal prizes and a highly commended prize in previous years.
“I didn’t really think I was going to get it but could only hope and it came true so I was very thrilled,” she said.
Claire said the inspiration for her winning mural, which is divided into four boards, came from Paeroa Central School principal Mona Hingston’s ambitious plan to revamp the school with more Māori themes.
“A lot of the names had Pākehā and gold mining themes and they wanted to get away from that and rebrand their school,” she said.
“The mural’s very personal to Paeroa, it involves their local history, their four rivers, the Māori way of life before colonisation, and the life of the rivers from the flora and fauna to the people who lived by the river and how they used it.
“It was a good theme and I tried to make each board distinct from the other, and each board had the colours of each house reflected in the lettering.”
The school’s four houses were Tarariki, Waihōu, Ohinemuri and Piako.
One of the school’s oldest buildings was used as Claire’s studio and many year 4 and 6 students helped her paint the mural. Claire said she and her husband Alan Bennett, who varnished the mural, unveiled it in July, 2021.
“The whole school attended the ceremony. Matua Larn Wilkinson did the blessing, I then talked about the starting point for each board and how the images evolved, the use of colour, pattern and composition,” she said.
“Then Whaea Chrissy Te Teira furnished the narrative with the Māori and Pākehā perspective and relevance to the land and waterways.”
Claire also recently completed a 10m high mural for Te Kauwhata Community House, a mural for Waerenga School and plans to create a mural at Hikutaia School.
“They’ve got to just go back to the drawing board and brainstorm what’s included for each board, so once I get feedback from [Hikutaia School] I can initiate each board,” she said.
Waerenga School also entered the competition with one of Claire’s murals.