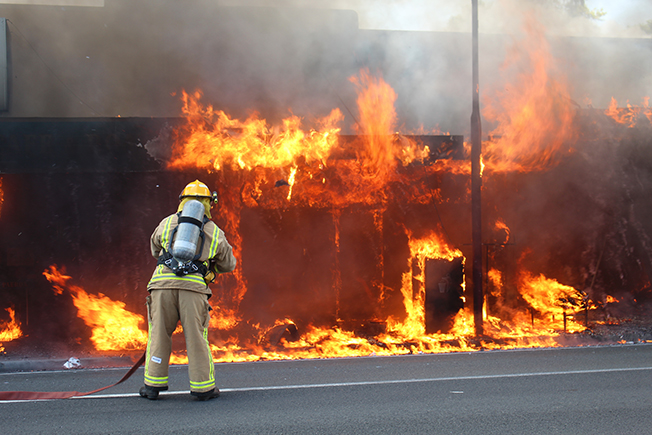 A firefighter prepares to douse the fierce flames at the front of several shops in Paeroa’s main street. Photo: TERESA RAMSEY

A charity opportunity shop owner in Paeroa’s main street is determined to “rise from the ashes” after losing everything in a “devastating” fire last week.
Forget Me Not op shop owner Susan Turner said although the shop was gutted and she didn’t have contents insurance, her team was determined to continue helping the community and planned to reopen within a month.
“We will stay positive and we rise out of the ashes and keep moving forward, we will not give up and we will be back in business,” she said.
“[It’s] a big clean up but we’ll just keep pushing forward. One door closes, many more open, as long as everybody’s safe that’s all that matters.”
Susan and her husband, Bear, were standing out the front of the shop on Wednesday afternoon when they noticed smoke in the rear of the shop.
“My husband saw white smoke, and then so him and the neighbour ran for the extinguishers, but it had already taken hold out the back.,” she said.
“They came back and said it’s too much, it’s already lapping out the kitchen door.
“So it was just get out and ring the fire brigade,” she told The Profile.
Within minutes, the fire spread through the shop and broke glass windows at the front before quickly spreading along the street frontages of several neighbouring shops and destroying an ATM machine.
Fire crews arrived from around the district, and firefighters fought the blaze from the rear then front of the shop.
The fire service is still investigating the cause of the fire, however, Susan believed it was caused by an electrical fault in the kitchen ceiling.
Susan said the op shop didn’t sell donated electrical goods.
“I have electrical stuff in there but… I stockpile it for somebody else that takes it.”
There was a fire wall between the shops, she said, however, neighbouring shop owners were concerned about damage to their premises.
The Mikkelsen Gallery, The Bakehouse Cafe and Midway Burger Bar were closed, and Old Mate’s Pizza and Paeroa News Agents were also temporarily affected by smoke-damage.
A Bakehouse Cafe worker, who didn’t want to be named, said she initially thought the fire was in her cafe.
“We were all in the shop and then I could smell something burning,” she said.
“Then I went out the back to get something and then all of a sudden I saw smoke all up here and then I thought the fire was coming from our building.
“I came to the front and saw Sue, she was outside and someone told me a fire started in Forget Me Not store, and then we evacuated people from our shop and we exited the back door.
“So yeah, it’s shocking.”
Bystander Michelle Surgenor said she thought the fire came from Midway Burger Bar next door to the op shop.
“We just saw this very black smoke just pouring out and it was getting bigger and bigger but it was quite a while before you saw any flames,” she said.
“But when the flames started, it just took off.”
Paeroa Volunteer Fire Brigade Deputy Chief Fire Officer Lindsay Hill later told The Profile there was no major damage to the properties on each side of Forget me Not.
“Luckily there were pretty solid concrete walls between them,” he said.
“The insurance guy’s windows are broken, there was no real damage to the burger bar.”
A Fire and Emergency spokesperson said the fire service responded to the commercial property fire at 12:36pm and crews from Paeroa, Puriri, Ngatea, Te Aroha, Waihī and Hamilton attended the scene.
The fire was extinguished two hours later and two fire investigators began a scene examination.
Susan took over the op shop in 2020 from Marise Carey, who established the shop, originally called the Paeroa Promotions Opportunity Shop, in Hughhenden St.
Marise earlier told The Profile she opened the op shop to give back to the community, with all profits are donated to charity.
“We wanted to open another op shop that was community-focused and affordable and in the same token, put the money back into Paeroa town and the local Hauraki area,” she said.
The shop was later moved to its current premises on Belmont Rd, and Susan said she had been planning on expanding again before the fire struck.
“It’s not the end, it’s not over, we’ve already found a bigger shop and we were getting ready to move,” she said.
DETAILS: Forget Me Not op shop is currently accepting donations of hangers, clothes racks and shelving for its new shop, visit: facebook.com/paeroaforgetmenot for collection information. By TERESA RAMSEY and GORDON PREECE

‘So much love’ shown for Tonga