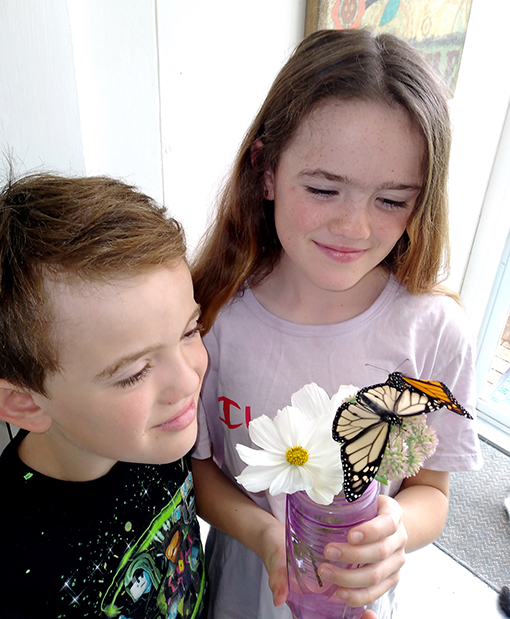 A Netherton butterfly lover “couldn’t believe it” when she recently spotted a rare white monarch butterfly chrysalis in her garden.
Megan Williams told The Profile the chrysalis blew off one of her trees during Cyclone Dovi recently, so she brought it inside and a white female butterfly hatched a week later.
“She was with another chrysalis which was orange, so it was quite weird that the other one was white,” she said.
“I thought maybe she was sick but her wings were fine and she could fly.
“My daughter Brea couldn’t believe it as well, she’s quite fascinated by it all.”
Two male white monarchs also hatched and Megan kept one and released the other one to “have a free life.”
Megan fluttered to social media to post photos of her rare discovery and said she received many reactions.
“A lot of people have been messaging me asking to share the photo, people have been talking to people in America about it, people have been wondering if anyone else is interested in it,” she said.
“I’ve spoken to all the butterfly [Facebook] pages and they’ve never seen one in New Zealand, but one lady said she saw one in America.”
Megan said she’d been growing plants to attract butterflies since she was a little kid with her grandmother, and continues the hobby as it reminds her of her.
“We get pollinators to try and encourage all the butterflies and bees,” she said.
“I’m making a swan plant hedge at the moment to attract as many butterflies as I can and I’m planting more flowers as well.”
Megan said she knew white monarchs existed overseas but were very unknown in New Zealand. She suspects they may have crossed the Pacific due to New Zealand’s humid summer.
“Maybe that’s starting to change their [the monarch’s] genetics,” she said.
According to Monarch Watch’s website, white monarchs have also been spotted in Australia, Indonesia and the United States mainland.
While they’re extremely rare with only a few reported yearly, O‘ahu, Hawaii, is the most common place to spot them, where it’s believed up to 10 per cent of the monarch population are white.