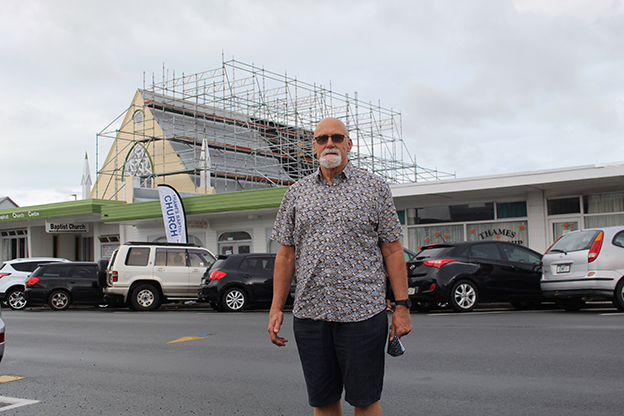 Thames Baptist Church pastor, Chris Lee says the new roof will be screwed in to prevent it blowing off again. Photo: GORDON PREECE

Thames Baptist Church has received an anonymous donation of $80,000 to go toward the $160,000 cost of replacing their roof.
Pastor Chris Lee told The Profile the Mary St church’s roof was damaged in August last year after strong winds caused the roof to peel off “like the wing of an aeroplane”.
“The wind then sent bits of the roof across the road to Wenzlick’s, bent their fence and broke a couple of windows at TCDC,” he said.
“Luckily it was at midnight when there was no one around.”
Work started on the new roof three weeks ago after the church’s insurance company and an engineer looked into how the roof could be strengthened.
Mr Lee suspected one of the reasons the roof didn’t survive the strong winds was because the iron installed fifty years ago wasn’t secure.
“It was nailed in rather than screwed into the purlins and kauri planking,” he said.
“Part of it may have been because buildings breathe and some decisions in the past meant there was an unequal pressure in the ceiling cavity, so that’s why the builders rectified it this time and it will be on for another 100 years.”
Mr Lee said the 175-year-old church’s interior had also suffered water damage since the roof was damaged, which meant church services couldn’t be held there.
“When they took the original shingles off, they left the nails sticking out so instead of putting a tarpaulin on the outside to stop the weather, they put the tarpaulins on the inside so they wouldn’t rip,” Mr Lee said.
“We’re not using our auditorium or our kids zone so we’ve been meeting at Thames Civic Centre. When the red traffic light came, we’ve been meeting at the church lounge, which is unaffected.”
Mr Lee said over Waitangi weekend, six inches of water poured into the church.
The church’s insurance company will pay $80,000 for the new roof on the damaged side and the new roof on the undamaged side will be paid for by the $80,000 anonymous donation.
The new roof is expected to be completed by Easter before work begins on repairing the water damage, to be paid by the insurance company.