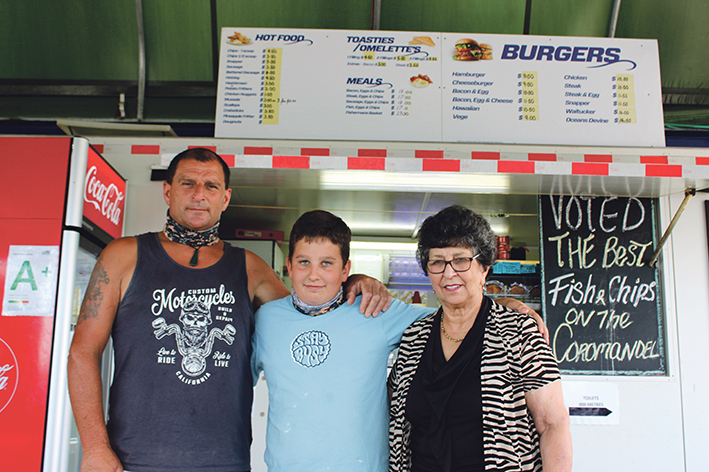 There’s a message written in chalk on a sign outside Ocean’s Divine, reminding people to never give up on their dreams.
It was put there by the fish and chip shop’s owner, Roger Duncan, who is a testament to the lesson.
In the four years he has owned Ocean’s Divine, along State Highway 25 in Waitakaruru, he’s battled to grow its reputation throughout two Covid-19 lockdowns and staff shortages.
It’s now been named one of the Thames Valley’s best places to call in for fish and chips by Profile readers.
“It was just a crazy idea that we thought we’d get a fish and chip shop. It was a crazy idea and it seems to have pulled off,” Roger said.
“It’s an achievement because it’s been a battle. We didn’t have a background in fish and chips or anything like that. I’ve been a commercial fisherman for a long time but I certainly didn’t ever think we’d be selling fish and chips to the public.”
Roger has owned Triple R Fishing for around two decades. Ninety per cent of his haul is caught in the Hauraki Gulf, and the snapper he catches is received by a licenced fish receiver before it’s cooked fresh at the Ocean’s Divine caravan.
“It gets caught, it goes to Auckland that day, it gets weighed and received, and then it comes straight back here,” he explained. The fact the fish was caught locally and supplied to the caravan daily could be the secret to its success.
“I think the biggest thing is just [providing] the old school, Kiwi food,” Roger said.
That meant fresh product, clean vats, and using an “old school” oil method, which he remained tight-lipped on. He’s helped out at the caravan by his two sons and his mum, Irene. She said the first two years were the hardest, and it was only the past couple of years that they started getting a reputation.
“Now people will come from everywhere,” she said.
They have customers who
travel from the North Shore for their fish and chip fix, as well as others from along the Thames Coast.
“There are a lot of other fish and chip shops on the Coromandel that are close to the water, so when you look at it like that, it is quite a feat to have that overwhelming response in our favour,” Roger said.
“There’s loads to compete with,” Irene added, “and all I can say is: I can talk to someone in Auckland, and they’ve already heard about us.”
The business now employs around 10 staff, and operates during the hours of 7am-8pm, seven days a week.
Not only do they sell fish and chips, but they also provide a pie warmer “full of goodies”, the “Waitak burger”, scallops, mussels, and fritters, among other items. At times, customers could face up to an hour’s wait due to the caravan’s popularity.
“To be fair, up until Covid came, it was consistent all the time: Thursday, Friday, Saturday and Sunday. It’s definitely growing,” Roger said.
“We’d had Covid once, shut down, and then it was Covid again, and we were just getting back on our feet,” Irene added. “It has been detrimental to our success but we’ve picked up again.”
REPORTERS REVIEW:
Well-cooked deep-fried fish with crunchy, salty batter that is strengthened by a squeeze of lemon juice. A generous helping of well-seasoned chips and bonus menu items such as deep-fried mussels and scallops which are sure to cater to locals and travellers alike.