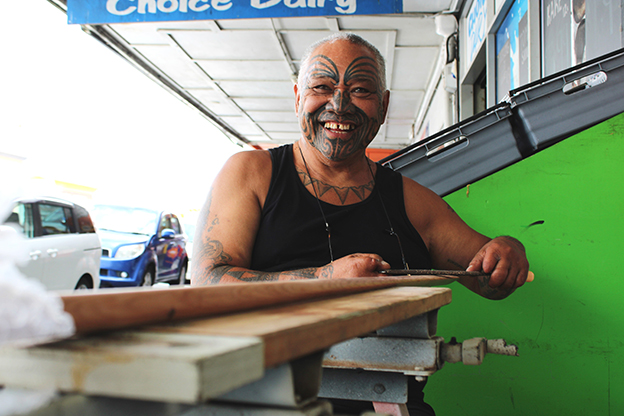 Darby Tuhaka has practised traditional tā moko all over the world. He arrived in Paeroa ten years ago and now calls the town his home. Photo: KELLEY TANTAU

Darby Tuhaka is 10 hours into tattooing a pūhoro , a traditional Māori tattoo which extends from the waist to the knees.
He’s facing a further 50 hours of work ahead of him, but he takes the time to reflect on his craft, pulling up a chair outside his shop along Paeroa’s main street.
“I practise a different type of tattooing,” he explains. “It’s a traditional tattoo in the old ancient style with a stick.”
The stick he refers to is an uhi (chisel). Historically, they were mostly made from the bones of seabirds, and like the tohunga (experts) before him, Darby creates tattoos by tapping the uhi with a small mallet.
“When I practice, the noise that you hear, the tapping, that’s the same noise they heard 2000 years ago,” he says.
“The [modern] machines have no love for you; it’s going to whack a thousand holes in you in one minute. Now, with a stick, it takes longer, but it doesn’t traumatise the skin, and that makes it really easy to heal.”
Darby, 61, trained in tā moko when he was 13 and living in Gisborne. The artform has taken him all over the world, enticing bystanders at every turn.
“When we were at tattoo shows in Berlin, Frankfurt, London, Rio, Las Vegas… we had to stop tattooing because the crowds got too big.
“They had heard of it, but they’d never actually seen it.”
You can count the number of tattooists still using traditional methods on one hand, he says.
“The 1907 Tohunga Suppression Act killed it, but it just went underground and went to sleep,” Darby says. “As we came into this time, we reawakened it and brought it up again.”
Darby had tattoo parlours in both Germany and Holland, and when he returned home to New Zealand a decade ago, customers followed him here.
“Pre-Covid, I had a steady flow of French, Europeans, and South Americans coming to get their tattoos. With Covid, the tourists have stopped, but now what I’ve got is local people.”
And for Darby, the most important thing when it comes to tattooing a person is their spirit, or, wairua.
“Wairua doesn’t know colour,” he says, “it only knows spirit.”
He stops for a brief moment to say hello to a passer-by. It’s something that happens at least a half dozen times in the space of a few minutes.
“It’s not hard to say hello,” he says, when asked about his sunny demeanor.
“My grandparents were the same.”
He reenacts a scene in which, as a child, he encountered his tūpuna (grandparents) saying hello to a stranger. “Try it”, they said to him, and he’s never looked back.
“It’s only five letters,” he says.
Darby grew up in Gisborne, but has tribal affiliations in the Hauraki through Ngāti Tamaterā.
It was divine intervention that led him to Paeroa, he explains.
“I had come from a city [overseas] that had one million people, but we stepped off the plane after a 25-hour long-haul flight, and stopped here for a feed of fish and chips.
“I parked right here, and looked at the shop. It had a sign which said ‘For Rent’.”
Within five days, he had moved into the shop which would become the Healing Ink tattoo studio. It now doubles as a Polynesian and Māori taonga museum and art collection, and beyond the threshold, Darby practises traditional healing, too.
There is a sense of serendipity and providence surrounding Darby.
On the day he sits with the Valley Profile, it is exactly 10 years since he was handed the keys to the studio.
And when he first arrived in Europe around 25 years ago during a low period, it was a stroke of luck that presented him with a second lease of life.
“I stepped off the plane in Amsterdam, it was 20 [degrees] below zero, and I had $60. I bought a ticket on a train and went as far north as I could go, right up in the northern part of Holland. I went into this bar, sat down, didn’t have a lot of money, but bought one glass of beer and started talking to the man next to me… and that night, I was working.”
Entwined through it all is an obligation Darby says he and the people he works with must uphold: “He maungārongo ki te whenua. He whakaaro pai ki ngā tāngata katoa. Peace on the land and goodwill to all people.”

Principal ballerina at home in Turua