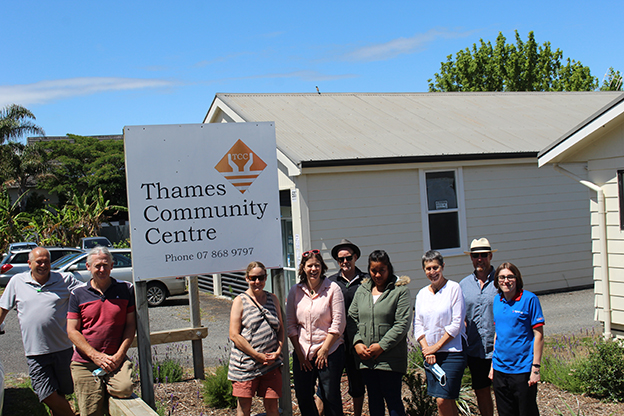 More than 50 volunteers have received help with their driver licences this year thanks to a Thames Community Centre programme.
The centre’s Drivers Programme involves fundraising for volunteers’ learners, restricted and full licence fees, driving lessons and defensive driving courses as a gift for completing community work.
At a gathering at the centre on December 8, manager Jeff Whitfield acknowledged all volunteers, mentors and driving instructors for their participation in the programme, which was established in 2017.
The aim of the programme was to help people become “more employable”, he said.
“The genesis of it was creating legal, safe drivers so they wouldn’t get hooked up with the justice system,” he said.
“Through the programme they [the volunteers] learn about themselves, gain confidence, get community creditably, gain connections and get jobs.”
Mr Whitfield said in 2020 the centre realised some learner drivers couldn’t get their restricted licence because they didn’t have a car to practice in or a caregiver to practice with.
So in 2021, Valley Toyota chief executive Wayne Richards donated a car for driving lessons.
The centre was then able to engage 12 mentors to teach volunteers through a 12-week programme, which included lessons with professional driving instructors.
Brennan Dollard got involved in the programme through voluntary IT work at Thames Community Centre.
“Jeff noticed I had a few struggles with getting my restricted licence as I had no one to practice with as my parents were busy with their jobs,” he said.
“While I was working on getting my restricted licence, the centre managed to get me a job at Mobil Thames and then a month later I got my restricted. So that’s definitely helped with me being independent and getting myself to work without relying on my parents.”
Brennan said he recommended the programme.
“It’s amazing, there’s no better way to describe it, it opened a lot of doors and avenues to get further in my licence,” he said.
Mentor Don McAndie said the programme for him was about giving back to the community and the younger generation.
“I’ve been part of the motor industry for many years and I think it’s great to see the younger generation have the opportunity to get their licence so they can embark on careers requiring a licence, which open up their lives,” he said.
Organisations who provided financial support for the centre’s driver programme include Trust Waikato, TCDC Community Board, Harcourts Foundation and Community Waikato Tindall Foundation.
Establishments in the community where drivers volunteer include SPCA OP Shop, Bright Smile Community Gardens, Thames High School, Te Korowai Hauora o Hauraki and the Seagull Centre.