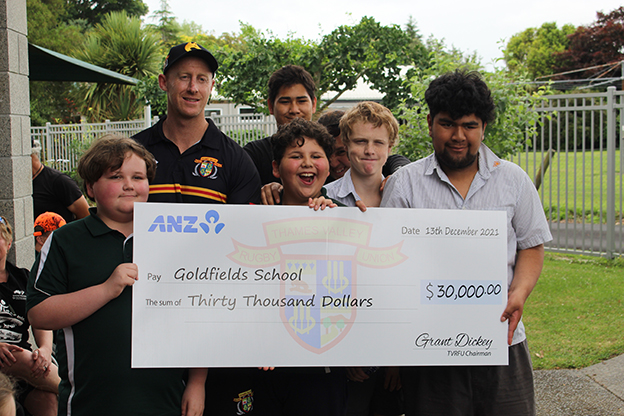 Paeroa’s Goldfields School has received a $30,000 donation from Thames Valley Rugby Union.
Thames Valley Swampfoxes Head Coach David Harrison said the reason for last Monday’s donation began four years ago when former Head Coach Matt Bartleet wanted to create more community connections.
“We were searching for a group we thought we could connect with and help make a difference and Goldfields School was an obvious choice for us,” he said.
Mr Harrison said the main money maker was from the auction of their Goldfield students-designed jersey after their 50-15 win against King Country in a charity match in October.
“We’ve got some great communities who support it and some of the money people pay is pretty humbling,” he said.
Mr Harrison also said they were lucky this year to have a jeweller donate diamond earrings that were raffled off, which gave them a bit more money, with the union also topping up to give them $30,000.
“It’s the most we’ve raised in a single season,” he said.
Goldfields School principal Cam Mckenzie said the donation was “great” and would be spent on a contribution toward the school’s $60,000 new disabled van, an important asset for the school.
“We’re going to put the Swamp Foxes logo on the side of the van to recognise their contributions and take them around with us,” he said.
“Our students go all round the community in the van for work experience, class trips, horse riding and the park.”
Mr Mckenzie said while the school loved donations it was the relationship with the Swampfoxes that was more important.
“They really care about our students and they want to give back, and their whole mindset is they want to make their players better men. They think that being involved with us helps keep those players grounded and think of other people who aren’t as advantaged as them,” he said.
“Thanks to the Swampfoxes and congratulations for getting through a tough season.”
Goldfields School students also helped design the charity jersey in 2018 for their match against Horowhenua-Kapiti, and in 2019 for their match against South Canterbury.