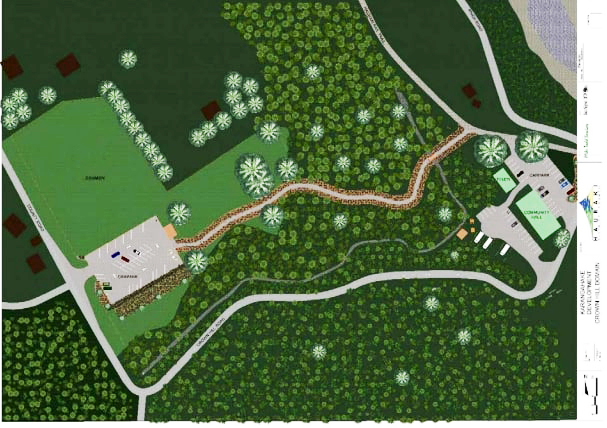 The Karangahake Gorge as it is is a “death waiting to happen” and Hauraki District Councillors don’t want that on their conscience.
They unanimously voted at a recent meeting to develop the gorge in a staggered approach, including creating a car park off County Rd to alleviate safety concerns on the state highway.
Between 2010 and 2019, there were 21 deaths and 95 serious injuries along SH2, Mangatarata to Katikati. Back in July, the Karangahake Gorge was closed for more than seven hours after a crash critically injured two people and seriously injured another. The same month, a pedestrian was seriously injured after being struck by a car along the same stretch.
Council’s development would see an entrance way created off County Rd into Cornes Paddock, located on the corner of Crown Hill Rd and County Rd.
Under stage one, it would install a metal carpark, a perimeter fence, and planting. Stage two would see the car park sealed. It will have around 30-40 car parks and be open seven days a week.
The cost to do this work will be around $160,000.
Currently, the reserve has been open to a grass car park during the spring through autumn periods, and ‘no parking’ yellow lines have been painted on Crown Hill Rd to mitigate dangerous parking practices.
But the gorge was growing in popularity and “something needs to happen” to solve its safety issues, Mayor Toby Adams told staff at the meeting.
“There are cars parked on the side of the road going up to the car park, there are cars parked on the side of the main road, there are cars all over the place.
“There’s no happy way to say this: it’s just a death waiting to happen, and there’s no way I want that on my conscience,” he said.
Mayor Adams recognised the creation of another car park could upset some residents, but with visitors flocking enmasse to the historic area, more permanent parking was needed.
“I know the residents like it because of what it is, but that’s also why people want to come,” he said. “It’s not easy having something so spectacular in your backyard and not being able to share it, and at the end of the day, it is New Zealand’s to share.”
The Karangahake Hall Committee put forward an option to develop the Mackaytown Reserve car park, off State Highway 2; however council staff said the option faced significant challenges in providing access to the Hauraki Rail Trail.
The staggered approach at County Rd received support from councillors and was passed unanimously at the vote.
“I can’t wait to see this happen,” Paeroa ward councillor Jo Tilsley said.