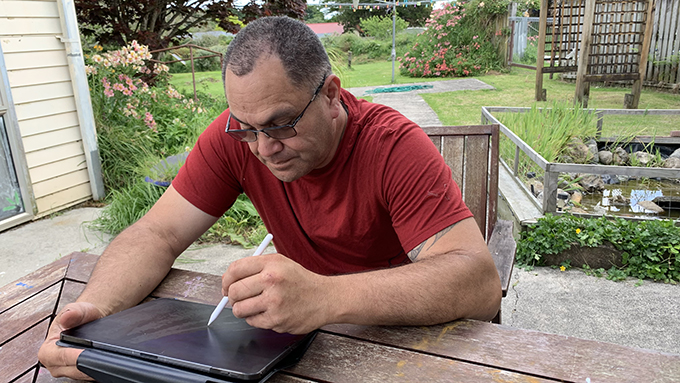 Big changes are afoot for Ngati Maru artist Rick Fisher. “I wasn’t ready. Then the universe opened wide and I’m ready now,” he said.
“I believe my readiness has come about because I realised that I was getting older and I had to do something about getting better and better at my art practice.”
The universe replied.
It was the universe that spoke when the Matatoki hall came up for sale and where Rick has now set up a studio where he can paint his murals.
It was the universe that spoke when artist daughter, Lyssie, encouraged her father to go digital on an iPad during the first lockdown.
And it was the universe that spoke when he found his airbrush compressor on Trade Me at half price when he needed it.
And the universe spoke again when the commissions began to roll in – three books to illustrate and seven murals to paint for local primary schools, all in the past 18 months or so.
“It’s just happened and my work has exploded,” Rick explained.
But life has not always been this way. Childhood was difficult for Rick. “It can really knock you down. I fought back by being as good as I could be at what I know.”
What he realised early on was that when he made art, he could sink into his own world where he was happy.
Even now Rick juggles his art practice with his work and family.
“Life is a juggling act; prioritising is the main thing, 95 per cent of my life has been drawing, drawing, drawing.
“I wanted to share what I had and I didn’t know how to share it.”
So Rick kept on making art.
He sees a need in Thames. “I want to make it beautiful to look at, worthwhile to stay in. I feel privileged to be here and to be able to share what I do with my community. We are here. We were forgotten. We are still here.
“Before mining, before tree felling, there was us. This should not be forgotten. History goes further than this. We never got to hear the stories.”
Rick Fisher is a story teller in pictures. His murals and his illustrations allow him to tell his stories and show the beauty he sees every day.
With his big works, he asks people who approach him to tell him what they want, then he takes the ideas and throws them into a pool.
Within two or three days, the ideas spark.
Then the process is about finding the unifying element, the one thing that brings it all together.
Rick’s work can be viewed in the heart of Thames on Mary St, St John at Kuranui, north of Thames, and at Tapu Primary School. By DEBORAH MACDONALD-BROWN