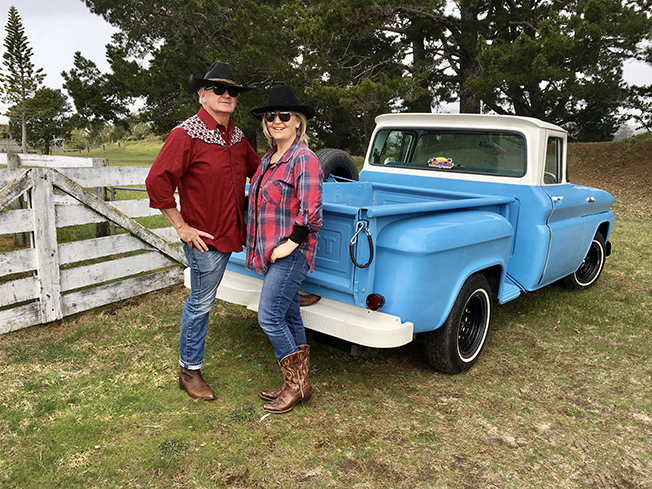 Around 10,000 visitors are expected in Thames next February for a country rock festival pegged to become one of the biggest events in New Zealand.
Organisers Andrea and Noddy Watts, who also run the Beach Hop event, have big plans for their new three-day Hootnanny Country Rock Festival, which will see some of the New Zealand biggest country stars on stage at the former Thames Racecourse.
“We want this to become, like Beach Hop, to be a major event on the New Zealand event calendar,” Mr Watts said.
“We may add more days to it in the future… but for the first year we’re pretty confident that it’s going to be a cracker.”
Mr Watts, who grew up in Thames, said he didn’t want locals to miss out on getting a ticket to the event, which will also support local retailers, businesses and community groups.
“We’ve got a limit of 10,000 people on our resource consent, and I’ll be really upset if 9000 people come from out of town to be honest, because we created this event for Thames.”
Mr Watts said he learned a lot about holding a large event in Thames when they brought the annual Beach Hop to the town in March, which was a “huge success”.
“It just blew everybody away, the way that the community got in behind it, getting the school kids there to welcome us and be part of it, retailers, the whole town.”
Holding Beach Hop in Thames was a “tester” to see how the town would react to an event, he said. The Hootnanny festival came about after six visits to Nashville as part of their business taking tour groups to the United States, which they’ve done for the past 10 years.
“On Broadway where all the honky tonk bars are, it’s just full of young kids just playing their hearts out and Andrea and I just said we need an event in New Zealand where we can give them a break.
“So that’s where the idea was born to create a festival that we can get young kids from America to give them that big break supported by our top Kiwi musicians and… Thames is the perfect place.”
Hootenanny was an old term for “country party”, he said, and the original spelling was changed to Hootnanny to trademark it for the Thames event. The three-day festival will kick off on February 25, with on-site camping and a shuttle bus running into the town centre for ticket holders.
Security and Covid-19 double vaccination certificate checks would be in place, he said.
There will be two stages at the festival, a Kiwi country stage featuring well-known Kiwi performers such as Brendan Dugan, Dennis Marsh and Marian Burns, and the NZ Motorcaravan Association stage, which will host young and up-and-coming country rock artists.
“These stars are just amazing, a lot of them are just as good as what we saw at Nashville. A lot of them come from Gore, which is not surprising… they’ll be playing Queen and the Eagles and a bit of modern stuff as well, but they country it up and rock it.”
Big rig trucks will convoy from Kōpū for a parade through Pollen St on the Saturday morning, arriving at the racecourse around 9:30am, where there will also be around 400 cars on show, country markets, carnival rides, barrel racing, monster trucks, lawn mower racing and freestyle motocross included in the ticket price. On Sunday, there will also be an automotive swap meet as well as attractions and entertainment.
DETAILS: More information or to purchase tickets: hootnanny.co.nz. By TERESA RAMSEY