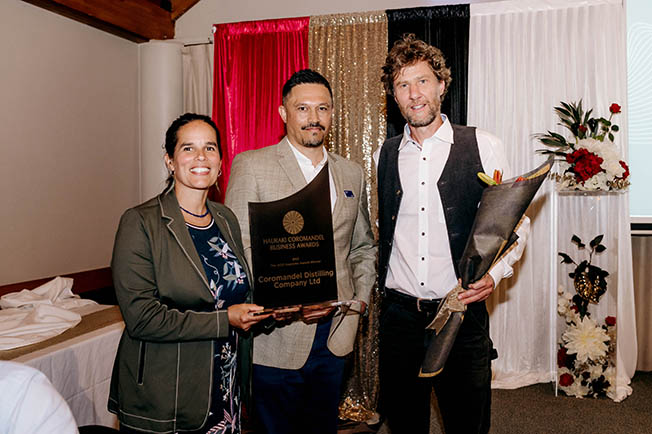 A few years ago, Daniela Suess and Paul Schneider knew nothing about distilling gin.
Now, despite starting their business during the Covid-19 pandemic, they’ve taken their Coromandel Distilling Company micro-distillery in Thames to the international stage, and last week won both the Manufacturing and Trade and Supreme Awards at the Hauraki-Coromandel Business Awards.
Paul said they didn’t expect to win the Supreme award, which was announced at a gala evening at Grand Mercure Puka Park Resort in Pauanui on October 28.
“We always set out to give it our best but you never know what comes really, so this is a really beautiful surprise for us,” he said.
“It’s shown us what we’ve been trying to build over the past two years especially is something that has integrity and quality and stands on its feet.
“All that effort and love and passion is beginning to bear fruit.”
The couple are “entirely self-taught” when it comes to handcrafting their Awildian gin, but their passion for the spirit with its Coromandel flavour has already won them multiple international awards – most recently, silver at the World Spirit Awards in San Francisco and the International Wine and Spirits Awards in London, the longest-standing spirits awards in the world.
“That’s when we realised that we actually have the potential to put the Coromandel on to the map of distillation and fine gins,” Paul said.
“We certainly continue to learn but we’re also increasingly confident to show what we have and what we can make, and show the pride behind running this business in Thames and on the Coromandel.”
However, the journey so far had been tough, Daniela said.
“We started out in Covid times so we never had any tourists, it was pretty much Covid straight away… it’s not the greatest timing to start a new business but the community and the locals were so embracing and so supportive.
“They gave us great feedback because the first year was all about experimenting, trying the gins. They gave us great direction… in that way the community was great.”
The couple started building their distillery in 2017, tucked away at the Depot in historic Grahamstown.
“The building had to be built from scratch and comply with, I think, seven Acts so all that needed to be navigated and we’re new to the industry so the learning curve was probably more vertical than it was a curve,” Paul said.
Now, Coromandel Distilling Company gin is distributed around the country.
Their latest creation, a Christmas gin unique to the Coromandel Peninsula that has already won an award in London, will be released within the next couple of weeks.
“We have just held back with releasing it because we wanted to make it a Christmas gin,” Paul said.
“It has huge provenance, it really celebrates the Coromandel from beginning to end.” By TERESA RAMSEY