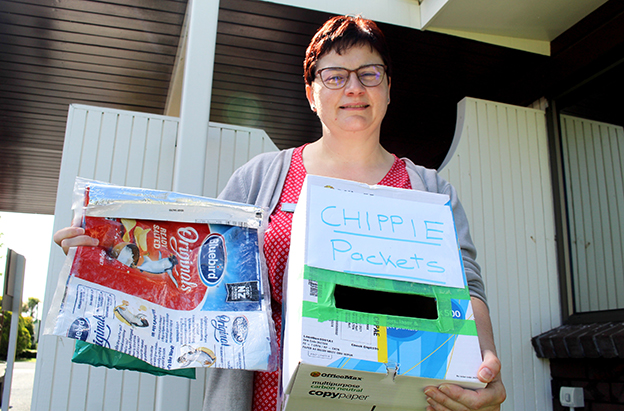 The humble chip packet might be emptied in record-breaking speeds during a trip to the beach or on a family picnic, but to decompose, they take 80 years.
That realisation, plus the fact packets of chips were a common item in household cupboards, inspired Sam Horne to help lead the rubbish away from the landfill.
She’s collecting empty chip packets to send off to the United Kingdom, where an ironing service is creating survival blankets out of them for the homeless. Sam, a nurse at Health Ngatea, did a six-week stint at the Auckland City Mission’s medical centre, and saw first-hand the effects of homelessness.
“I had a lot of dealings with people living on the streets, and something like this would be absolutely life-saving for them,” she said.
“The silver side [of the chip packet] reflects the body heat, and it keeps them warm and dry, and in England it’s going to be coming into their winter.”
Sam is originally from Buckinghamshire, in the UK, and found the project after her sister-in-law posted about it on her Facebook page.
After researching more about it, she discovered there was a New Zealand group, called The Chip Packet Project, who also created survival blankets for the homeless.
And while the UK donations will head overseas on November 22, Sam said she was interested in making the Ngatea collection an ongoing one, in order to support the New Zealand project.
“First of all, I thought we as a family would do it, but then I thought, there’s got to be lots of chippie packets around Ngatea. We’ve got two schools here. So, I thought we’d open it up and see if people wanted to drop their packets off [at the medical centre], and the managers were happy to support the cause.”
Sam, who has two children aged 13 and 11 who enjoy a good packet of chips, said she had no idea what was left behind could be recycled.
Not only was the project beneficial to people in need, but it also helped the environment, she said.
“It just saves all these crisp packets going into the landfill, because they can’t be recycled. So if we can actually do something positive with them, and stop so many going to landfill, that’s going to help the earth.”
DETAILS: People can drop off their washed chip packets at the Health Ngatea reception before November 22. Packets can be of any size. For more information about how to help, find: The Iron Man, or Chip Packet Project New Zealand, on Facebook. By KELLEY TANTAU