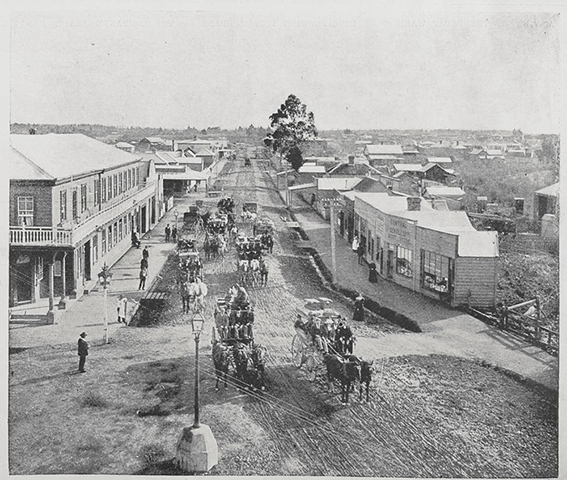 Paeroa by 1901 - a typical Monday morning. Miners from the Ohinemuri districts leaving for work after coming to Paeroa on Saturday. Photo: SUPPLIED

1875
An impromptu race between steamers the Pearl and Transit created a lively sight on the Waihōu River.
The Pearl left Grahamstown wharf 10 minutes before the Transit but the Transit passed her at Puriri. They both called in at Gibbons’ wharf between there and Hikutaia.
As the Transit was backing out, the skipper of the Pearl shot up alongside, landing cargo and passengers so cleverly and smartly it caused the greatest laughter and amusement to all the passengers.
The Pearl then kept ahead until arriving at Hikutaia, where, while landing more cargo, the Transit got in front and arrived at Paeroa 20 minutes before her.
Paeroa had been held for some years by Messrs Jackson and Russell, solicitors, of Auckland, in anticipation the opening of Ohinemuri for gold mining, which had now happened. The township was sold at auction at the Academy of Music, Grahamstown. It was in a central position to the new goldfield, with easy access by water. No pains were spared in laying out the property in first rate style, and removing the river snags which were once an impediment to navigation.
Substantial buildings, including a hotel and a large store were erected. What made Paeroa of so much value was that it could be reached by steamer, and from there the diggings could be reached in various directions.
It was hoped Paeroa would become the principal business centre of the new goldfield.
Larrikins and “hobble-de-hoys” were infesting the streets of Thames using insulting language and gestures, stealing goods and money and tempting other boys to steal. Thames tradesmen were fed up.
No steps had been taken by the police towards the suppression of this rapidly increasing criminal class. A policeman needed to go round in plain clothes and really try to bring some of the offenders before the magistrates.
At Tapu, nine children attended school to try their hand at writing test examination papers.
After the test was over, there was a discussion between some of the boys regarding the first question in “object teaching”, telling them to “name and contrast the principal points in outer and internal formation, and in habits, in which the cow differs from the horse”.
Many outer contrasts were mentioned, such as cloven hoofs, chewing the cud, mane and tails, but internal contrasts appeared to puzzle them completely.
One boy observed that in his paper he wrote: “Never was inside either a horse or a cow, therefore did not know the difference”.
Another said he did better than that – in his test paper he wrote: “Horse droppings to be found in a horse, but none in a cow”.
Even that did not appear to be satisfactory and they resolved to go and ask the butcher.