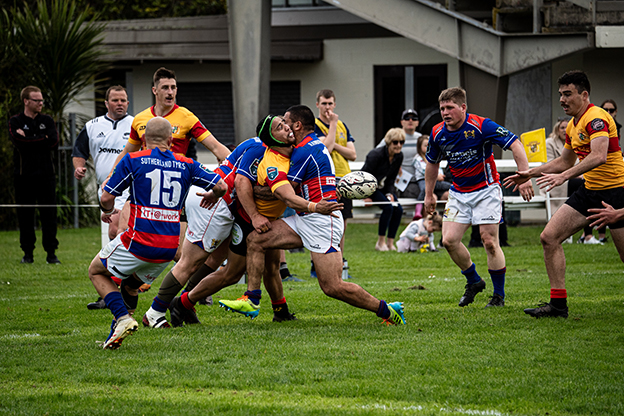 Tiaontin Raoren in a tight situation releases the ball to Will Newbold.

Thames Valley remains undefeated in the Bunnings Warehouse Heartland Championship after a 30-15 victory over Buller at Te Aroha on Saturday.
Buller were no “easy beats” and defied their position at the bottom of the points table with a very good first half to lead, 15-8 at the break. They had spent a lot of time on attack and their full back, Jesse Pitman-Joass took advantage of infringements by the Swamp Foxes to kick five penalty goals.
In a rare attack on Buller’s line, Cameron Dromgool scored a try for the Valley and soon after Tiaontin Raoren, playing at first five eighth, slotted a penalty goal. Following some harsh words by the coaches at half time, a more focused Thames Valley side took the field in the second half. They immediately went on the attack and were rewarded with a try to Raoren.
There was no conversion and then Buller were unlucky not to add to their score when another penalty attempt by Pitman-Joass bounced off the post. Mid way through the half, Raoren scored his second try after a good build up by the forwards. He converted his own try to give the Swamp Foxes the lead 20-15. The kick off by Buller went out on the full and from the resulting scrum on the half way, Luke Masirewa picked up the ball and after a great solo effort scored a try.
Once again there was no conversion and the game ended with Valley hot on attack and finally putting Trinity McQueen over for an unconverted try. This was another bonus try victory and they sit at the top of the points table equal with South Canterbury on 15 points. However, South Canterbury have the better points differential which make them the number 1 seed. For Buller: Jesse Pitman-Joass five penalty goals. For Thames Valley: Tiaontin Raoren, two, Luke Masirewa and Trinity McQueen tries. Raoren a conversion and a penalty. Next Saturday Thames Valley meet West Coast in Greymouth.