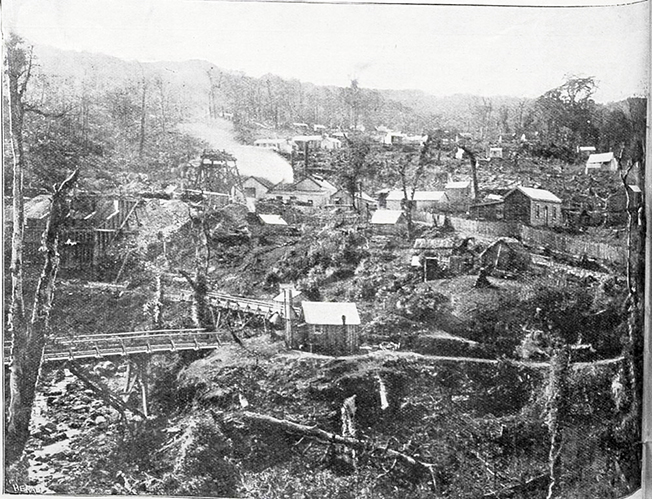 “I am the Golden Man!” shouted the ‘Black Doctor of Maratoto’, not that many could understand him as the words were in Spanish and garbled with alcohol.
The Black Doctor was a mysterious character – said to be a swarthy Mexican, raised at one of the silver-mining centres in that country. He was educated, spoke English fluently, and was knowledgeable about mining. He claimed to be particularly lucky as a prospector. His ‘doctor’ title came from his skill at making medicines and lotions from herbs. Sadly alcohol was his great weakness.
During the mid-1870s he traipsed about the district from Thames to Waitekauri gold prospecting and gum digging. Later, in the 1880s, he is said to have worked as a cook at Hikutaia’s Pioneer Hotel when under the management of the Corbett’s.
It was on one of his well-lubricated journeys that he stumbled across a magnificent gold bearing reef.
A legend grew around the discovery and the facts are now murky. One version has him drinking up large at Hikutaia’s Pioneer Hotel after weeks of digging for gum near Waitekauri. On his return journey, he got lost in the bush and came across a reef which outcropped so much it made a waterfall over which he clambered with some difficulty.
The lode was about 10ft thick, the stone rich in gold as well as what he called ‘sulphureth’ of silver. He had no pick to take a sample but managed to bash off a few pieces with a hard stone. He wrapped the samples in a handkerchief and attached it to his belt. Alas the little parcel was knocked off and lost as he passed through scrub. Another account has him returning from a spree in Thames via a pack-horse track over the ranges, drinking a bottle of rum when he became lost and came across the reef.
The first person he told of his discovery was a well known prospector, Hone Werahiko, who was fossicking in the Waitekauri area. Hone was sceptical from the first and became even more so after weeks of searching failed to find the reef. “Porangi te taketa – the Doctor is mad!” he declared. Others set out to find the reef with no success and it was considered a swindle. The Black Doctor, however, was determined to find the reef again and when last seen was setting out on another expedition to reach it. Nothing more was heard of him.
Sixteen years later, in 1892, the Lowrie brothers discovered a reef that became the Golden Cross mine at Waitekauri. It was rich in both gold and silver, especially where it outcropped, and it evidently in every detail matched the Black Doctor’s description of his find. Legend has it that the Black Doctor’s skeleton was found on a rocky ledge near the reef in 1895. But it was in April 1893 that the skeleton of a man was found under a rock about a mile and a half from Lowrie’s claim, at Waitekauri. Constable Beatty made inquiries.
No person was missing, and the remains were unidentifiable. An inquest was not held as skeletal remains were often found and to hold inquests on all of them would have been an expensive operation. The skeleton was widely believed to be that of the Black Doctor who appeared to have sat down under the rock to die.
Ironically in death he did become the ‘Golden Man’. The Golden Cross yielded large quantities of gold and ultimately produced bullion to the value of £373,000.