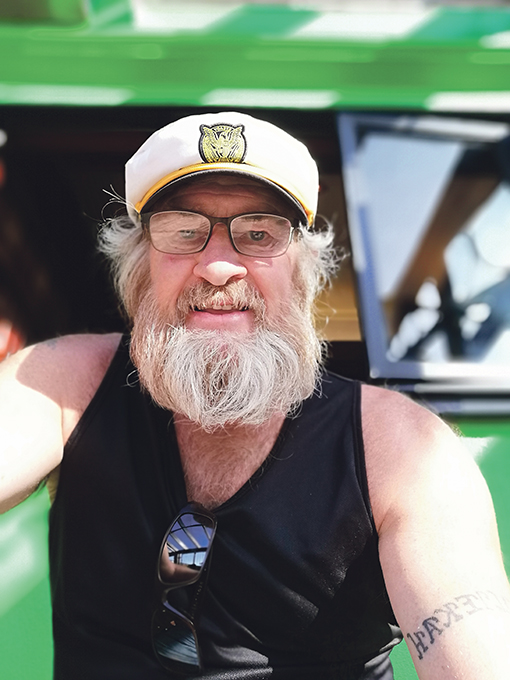 Thames actor Allan Judd stopped shaving and cutting his hair in preparation for a role in the still-unnamed Lord of the Rings TV series. Photo: SUPPLIED

A Thames actor stopped shaving and cutting his hair for a year in preparation for a role in the Lord of the Rings TV series that has since moved offshore.
Allan Judd was hired as a recurring actor in Amazon’s still-untitled Lord of the Rings series almost two years ago, for which he was to play a merchant character audiences could “get to know”.
“Then it all went pear-shaped with Covid and so my hair got all cut back,” he told The Profile.
However, it wasn’t all lost. Mr Judd was contacted again to instead play another part, which he said “turned into quite an integral little role within the show”.
He had completed around 30 days of filming for the first season before it was announced the series would leave New Zealand for the production of its second season, and would instead be shot in the United Kingdom.
Mr Judd, who said he couldn’t “give too much away” due to contractual agreements, said he was one of around 40 people cast who were a vital part of a particular city.
“You might be there from 4.15am until 6pm… so 14 hours on set and you might film maybe two minutes of work,” he said.
“They’ll do a scene that takes 20 seconds but they may shoot it 10 or 12 times.
“It’s amazing the money being spent on it.”
The series, which will be set prior to the events of the Lord of the Rings novel and films, has a budget of US$1 billion, and is understood to be the most expensive series ever made. “The security was over-the-top,” Mr Judd recalled.
“You’d get into a van to go from the costume room over to the set and all the windows on the vans were blacked out.
“You couldn’t go to the toilet without putting a robe on in case there are people outside with cameras, so we had to be very vigilant about where we went and what we said.”
However, Mr Judd said it was disappointing the production of the show had been pulled from New Zealand for its future seasons.
He’d been “booked in” to film the next season, so it was “gut-wrenching” to hear the news over the radio that his role in the series was uncertain, he said.
“It’s not only the actors, it’s the film crew, the sound, the lighting people that are all going to be out of employment as well.
“It’s right across the board. [The show] was very valuable to New Zealand.”
Mr Judd has been working in television for the past five years, and had roles in Shortland Street, The Brokenwood Mysteries, and The Panthers.
He was also a familiar face on the theatre stage.
The Lord of the Rings series’ first season – featuring Mr Judd, will premiere on Amazon’s streaming service Prime Video on September 2, 2022.
And while he was still hoping for the email asking him to head to the UK to recommence filming, Mr Judd said he was also focused on putting on some events locally. By KELLEY TANTAU