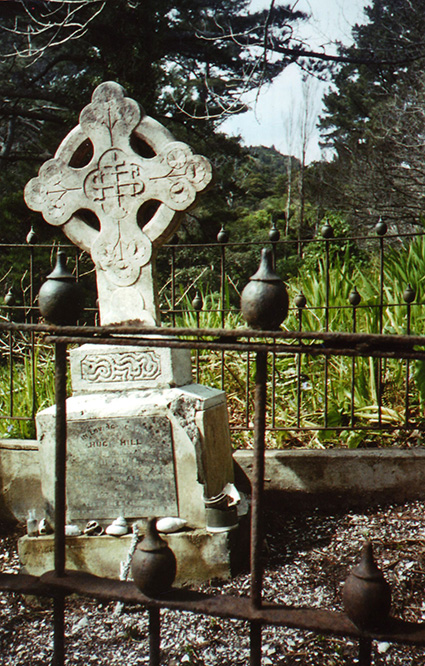 The grave of Hugh Hill at Shortland cemetery in Thames. Photo: SUPPLIED

PART ONE
Although some gas had been flying about, it was regarded as just one of those passing visitations by the men in the Old Caledonian mine at Thames.
It was late April in 1886 and Hugh Hill and Thomas Casley were working on the Red Queen leader in the No. 3 level, about 700ft from the shaft.
Around 10.30am, manager William Corin came and spoke to them. A fresh current of air flowed through the area.
At 11am, miner Frank Rowe came down and told them gas was floating about No. 2 chamber and to be on the lookout.
He advised them that if the gas rose it would be better to go up the pass about 20ft ahead of them, leading to No 2 level.
Hugh Hill replied cheerfully “All right, we will look out for ourselves Mr Rowe.”
But the manager then informed them that if gas was troublesome they could proceed to the No. 1 level to continue work there.
About 1pm, the gas became very bad at No. 2 level, ominously snuffing out the candles. Concerned for Hugh and Thomas, Mr Corin divided several miners into two parties – one to go toward the pass and the other to go down to No. 3 level by ladders.
Mr Corin then ascended to the surface to turn water down the shaft to dissipate the gas. Word was sent to the fire station for a hose reel to be brought to the mine.
In the meantime, fire was got up in the boiler so as to work the cage and several men succeeded in getting to No. 3 level.
To their horror they saw Thomas about 100 feet from the shaft lying on his face, but the gas prevented anything further being done.
A successful jet of water finally broke the force of the gas and the winding engine could be worked. Thomas was speedily brought to the surface.
Dr Payne, alerted to the tragedy, was waiting and tireless in his efforts to save Thomas.
He had him wrapped in hot blankets and applied artificial respiration.
A few minutes later Hugh, who was found near his mate, was also brought up. Dr Callan, also on the scene, thought the men must have been dead for at least an hour, but as they were not cold, resuscitation was tried. Finding this in vain, the doctors stopped their heroic efforts.
Thomas Casley’s wife, her mother and Thomas’ brother were now at the mine waiting for news and a painful scene followed.
Thomas Casley was an engineer, but on days when the engine was not operational worked on the Red Queen leader.
He was 32, married to Mary Jane and had no children. He was an earnest worker in the Wesleyan Church and Sunday school. Hugh Hill was 39 and left a wife, Emma, and several children. He was well-known and highly respected.
The deaths of both men affected the whole community. As a mark of respect, Thames tradesmen closed their shutters.
At the inquests the coroner said every reasonable care had been taken to warn the men. It was possible they were overwhelmed by the gas rendering them incapable of helping themselves. The jury found Hugh and Thomas were accidentally suffocated. They added that more caution should be exercised by managers in allowing the men to work in the presence of foul gas.
The funeral of Hugh Hill was largely attended despite inclement weather. The funeral of Thomas Casley was held the next afternoon. A most impressive service was conducted by the Reverend Best. The weather was again very trying.
Both Hugh and Thomas, who were said by Reverend Best to have been “suddenly taken from a dark and poisonous mine to the realms of infinite joy”, were buried at Shortland cemetery.
But they were not to rest in peace…
PART TWO WILL FEATURE IN NEXT WEEK’S VALLEY PROFILE