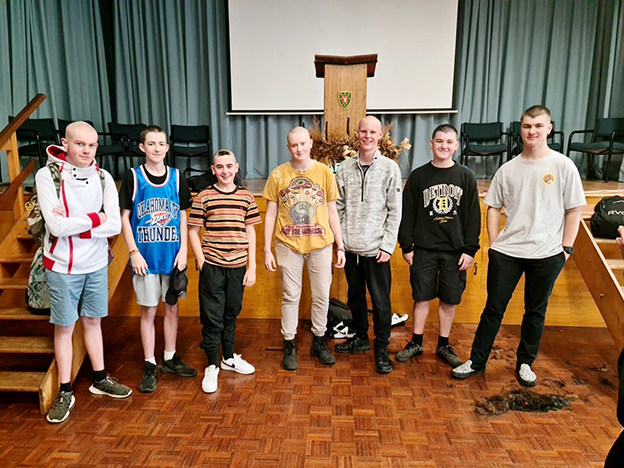 A group of eight students from Paeroa College has raised $1100 in a head shaving fundraiser for the Child Cancer Foundation.
Prefect Hamish Buchanan told The Profile the event was planned for Wig Wednesday – set for September 8 – but it had to be scaled down once the latest Covid-19 lockdown hit.
“We were originally going to run our event as a full week, with talks from past students who have struggled with cancer, and a wacky hair mufti. As it got closer to the 8th, we decided to run a social media campaign instead of our wig week,” he said.
The students planned and created a video which explained Wig Week to the community, and from that, raised $680.
“Rather awkwardly,” Hamish said, the students returned to school the day after the video released, and realised they still had a chance to run a head shaving.
So, on September 15, the eight pupils came together in support for child cancer, shaving various amounts of hair.
“The excitement buzzed in the air louder than the shavers,” Hamish said.
The prefects ran the event for two main reasons, he said, the first being that “almost all of our student’s lives have been touched by cancer in some way”.
The second reason was that Wig Wednesday fit well with the prefect’s theme for this year: acceptance.
“Seeing people get out of their comfort zones with wacky hairdos, wigs, and shaved heads is a great opportunity for our students to practice being non-judgmental,” he said.
“We want to push the idea that Paeroa College is a safe place for everyone, regardless of hairstyle.”