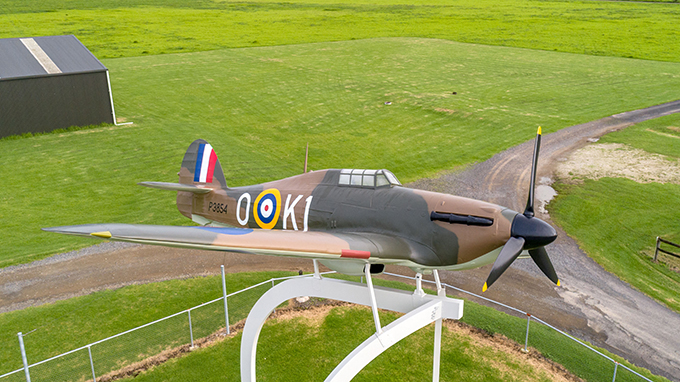 Thames’ Battle of Britain commemorations have been cancelled, but work is well underway for next year’s event.

After six months of hard work, planning, and “scheming”, this year’s Battle of Britain commemorations planned for this month have been canned because of Covid-19.
Sir Keith Park Memorial Airfield Society spokesperson Geoff Furkert said the society would now commemorate the Battle of Britain in September, 2022.
“As with all of life’s challenges, it is not the challenge itself but the way in which we deal with these adversities which makes the difference,” he said.
“The cancellation has given us the opportunity to reconnect with the members of our incorporated society and previous benefactors to reinforce our commitment and funding needs to complete stage two of the Sir Keith Park Memorial at the Thames Airfield.”
Stage one of the memorial project included a replica of Thames-born Sir Keith’s Hurricane aeroplane installed at Thames Airfield last year. Stage two includes a statue of Sir Keith, sculpted by Joanne Sullivan, a world-renowned Helensville artist and sculptor.
The society has also recently been gifted a Queen Mary downed aircraft recovery trailer with Bedford OXC prime mover from Michael and Christine Kemp, the visionaries and major sponsors for the Sir Keith Park Memorial.
Mr Furkert said two Queen Marys were brought to New Zealand in World War II – one for the North Island, one for the South Island. Mr Kemp restored the North Island unit in 2014, the second was currently being restored at the RNZAF Museum at Wigram, he said.
“Our Queen Mary is now being advertised in the United Kingdom, as there is no practical place to store this generous gift at the airfield. Proceeds from any sale will be applied to the memorial project.” Negotiations are also progressing with an Auckland tertiary institution, the Business Faculty, which was considering taking up a lead role in the forward fundraising as a student project, Mr Furkert said.
“Not only would this be a huge boost for our project, but also help to spread recognition of Sir Keith and his achievements (both in conflict and in peace-time) to a younger generation of New Zealanders.”
A redeveloped website with connections to Facebook and Instagram will be launched early September. The website, www.sirkeithparkmemorial.org.nz, will have a payments gateway, and any contribution made will be greatly appreciated. “We need your help to recognise and pay tribute to a most worthy New Zealander – Sir Keith Park, a Thames boy and hero.”

Stay at home order in place for Kaiaua/Whakatīwai