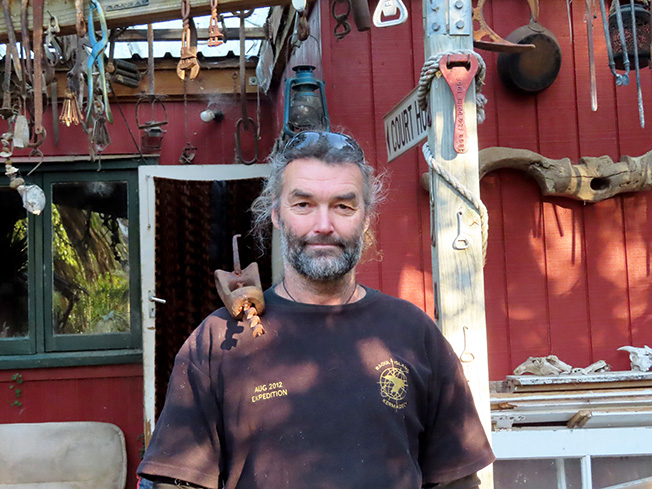 Thames artist John McKeowen is a man on a mission – to make art and plant trees because he loves nature.
Nature is reflected in John’s art in all its forms, whether it’s his metal and wooden assemblages and furniture, costumes, or poetry. Much of his art is the bones of nature not fleshed out.
“What I make is based on nature. It’s my passion,” he said.
“Art’s everything. It’s the birds, the leaves, the wood, the trees. I like to know how things work whether it is a dinosaur or a classic car and reflect this back.
“I want people to get this.”
John’s working life began as a deep sea fisherman, then forester, mechanic, builder, recycler, arborist, heavy truck driver, fire-fighter and child tracker for social welfare.
“I was good at it because I could think like a naughty child,” John laughed.
He came to make art later in life. “When I was a child I didn’t know I was an artist. I couldn’t paint or draw.”
Then one day, on Raoul Island where John managed maintenance and supply for the Department of Conservation team, he wanted to make a present. With nothing there to buy, he decided to make a Pukeko from discarded bits and bobs. The team loved his work. Until then, he hadn’t realised that he was an artist.
That Pukeko was the impetus for art making becoming an integral part of his life.
John has inspired artistic life in Thames whether fire breathing at the Thames Arts Festival, designing the Steampunk the Thames logo, decorating the Steampunk tractor or designing and making costumes for all the festivals.
His work can be seen at the Steamy Sisters store in Thames, or at the southern entrance to Thames where he contributed the Steampunk aesthetic to an art installation celebrating Thames 150th anniversary.
The Solarpunk aesthetic of transforming the future world through art has become a new focus for John.
He believes Solarpunk is the way to celebrate the world and educate people about the issues that face the planet and the environment in a way that’s engaging. A way to show people through visualisation and help them get a grasp of what can be done without telling them what to do.
John also wants to teach his son, Keenan, that art is a way for him to express himself, and it’s the best way to get his ideas and passions across to the world. He will foster whatever art his son wants to do.
“I believe that art is necessary for our mental wellbeing and our physical wellbeing as well.
“Beauty and emotion are necessary for our state of being.” By DEBORAH MACDONALD BROWN