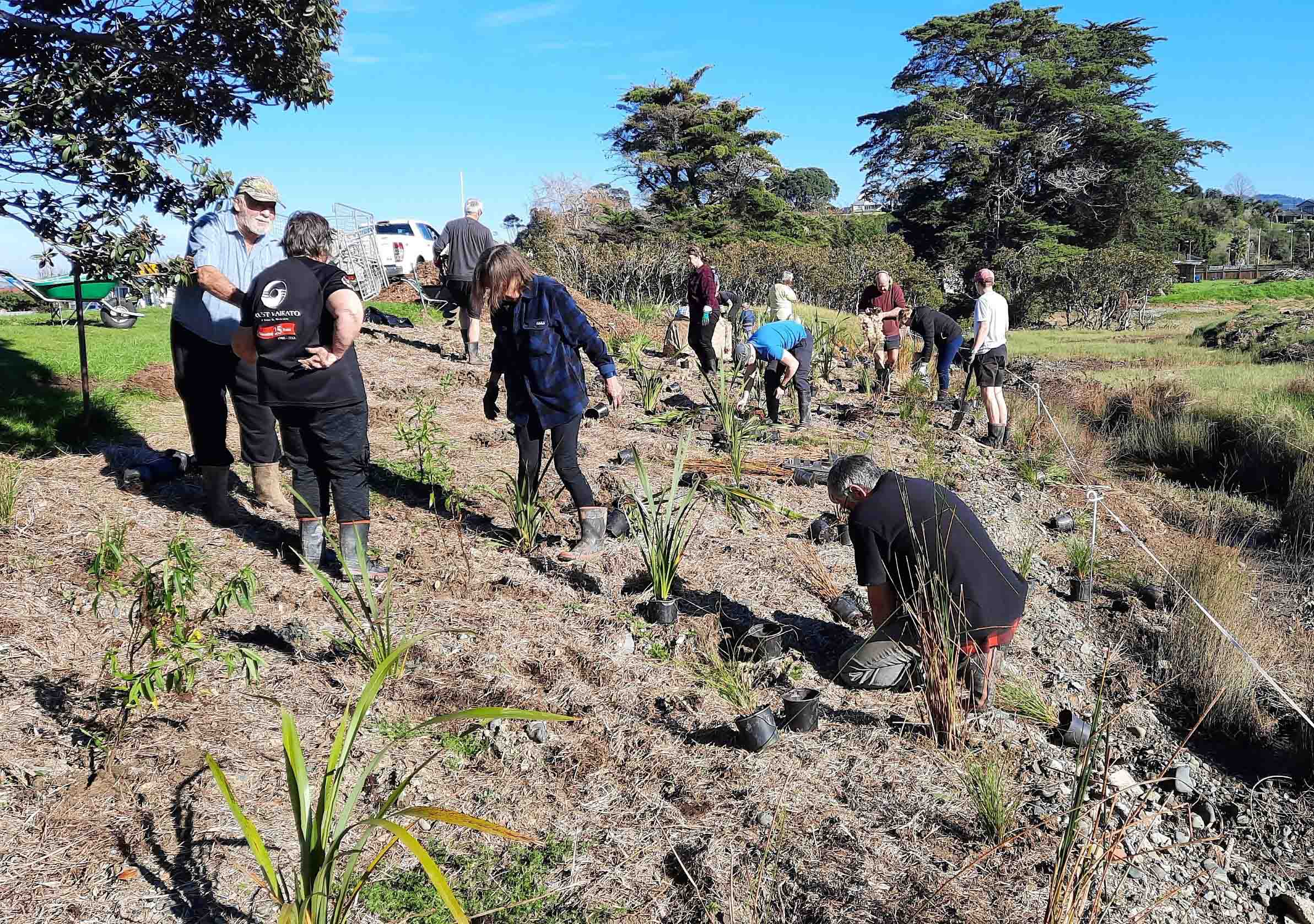 The volunteer crew in full swing at a community planting day for a section of land between the road and tidal zone of Hauarahi Stream, at Kaiaua. Photo: SUPPLIED

The first day of August felt more like the first day of spring for The Western Firth Catchment Group and Landcare Trust.
They had organised a Community Planting Day for a section of land between the road and tidal zone of Hauarahi Stream, at Kaiaua, putting 345 native seedlings in the earth in a pattern designed to mimic a wetland edge zone.
“It was great to see a community event like this right in town and to restore native plants to a bare area recently landscaped as part of a flood management project,” Landcare Trust’s Waikato Catchment Coordinator Ric Balfour said.
“It was fantastic to have great local support and to see such a professional job done of it too.”
Mr Balfour said the day was a “real local effort” with plants donated from Te Whangai Trust nursery, mulch donated by Franklin Trees Thames, wool provided from Stu Hill, and enthusiasm given from 15 locals who helped plant and mulch for a couple of hours in the sun.
“While they were at it, the volunteers picked up a pile of rubbish, an assortment of recyclables and pulled out a bunch of weeds,” he said.
Each plant received a fertiliser tablet, and a collar of daggy wool to act as a weed suppressor and moisture retaining layer. After that, chip mulch was spread between the plants to gain a similar benefit over the whole planting area. With that done by 11.30am, the crew knocked out another few hundred plants along the stream opposite the Domain on Justin Johnstone’s property. To cap off the event, the local fire station opened up the brigade’s BBQ facility so the hard-working volunteers could be rewarded in traditional Kiwi fashion.
The streamside restoration project was an outcome of the May 15 community catchment meeting, held to look at what could be done to improve habitat conditions along the Hauarahi Stream.
The meeting focused on developing an action plan for the catchment, but loud and clear was the message that action meant boots on the ground with tangible results, Mr Balfour said.
“This has been the style of the Western Firth Catchment Group since they got going about five years ago.
“The group of local farmers have steadily worked on riparian planting, fencing and pest control along Pūkorokoro stream and other streams flowing into the Firth as part of the Living Waters Project.
With that project winding down, the Hauarahi was the next sub-catchment these motivated local farmers wanted to focus on.”
More restoration activities are being planned for this spring. For more information on the Western Firth Catchment Group Trust go to www.westernfirth.org.nz/home.