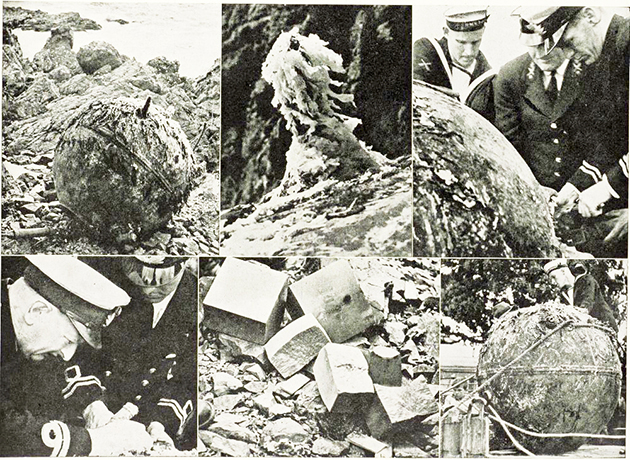 An unusual object washed up on the Thames Coast. Photo: SUPPLIED

As part of a Valley Profile series, MEGHAN HAWKES searches through old newspapers to bring you the stories Thames Valley locals once read about themselves

1941
An unusual object which washed up near Kirita Point, 30 miles north of Thames, caught the attention of Mrs Noel Strange who started probing it with a knife.
As she was picking at the object she suddenly realised what it was – a mine covered with thick slime, weed and mussels.
It had come to rest on the rocks about 25 yards below the coast road. The discovery was reported to the military and naval authorities in Auckland, and local defence kept the mine under surveillance until it could be dealt with.
Great courage was shown by two members of the New Zealand Temporary Staff who waded into the water and secured the mine, which was bobbing dangerously close to the rocks, with lengths of fencing wire.
Thames fishermen were warned to keep a look out in case there were other mines in the Gulf. A naval party from Devonport were unable to approach the mine from the sea and landed at Coromandel, being driven to Kirita Bay. They displayed very cool courage as they tackled the 500lb of explosive contained in the mine.
Four of the lead horns had been bent over at right angles and two had been knocked off by the mine bouncing against the rocks. After the explosive had been removed, the mine was taken to Coromandel and detonated in a paddock.
When he first came to Turua, the clerk of the Hauraki United Drainage Board saw a 1000 ton ship come up the river and load timber before sailing direct to Melbourne.
“Can you imagine that now?” he asked. The Waihōu River had been neglected to the detriment of the farm lands of the Hauraki Plains.
There was now a large island in the river near Turua which was about seven acres in extent. That island was once only a rush in the river. The river had silted up, the damage being done by the gold mines using it as a sludge channel.
Plans to begin rebuilding the stop-banks along the foreshore of the Hauraki Plains from Waitakaruru to the Piako River and up the river to the Ngatea Bridge were announced. The job would take about five years to complete.
The bank would have a 20ft base and be eight feet high, all the material being taken from the inside. It was estimated the dredge would do about two miles a year. The work was started at Pipiroa as that was the most vulnerable section of the stop-bank.
When Mr Boles of Paeroa came in for a windfall he said “It’s just my lucky period. At the Paeroa races recently I backed a £63 dividend and thought I should carry on while my luck was in so I bought an Art Union ticket.”
The ticket won the first prize of £2000. Mr Boles, a married man with one child, was supervisor at the Paeroa Post Office.
When asked what he would do with the money, Mr Boles replied that he would “just box on as usual,” but would now have a feeling of greater security.

No positive Covid-19 tests for Coromandel