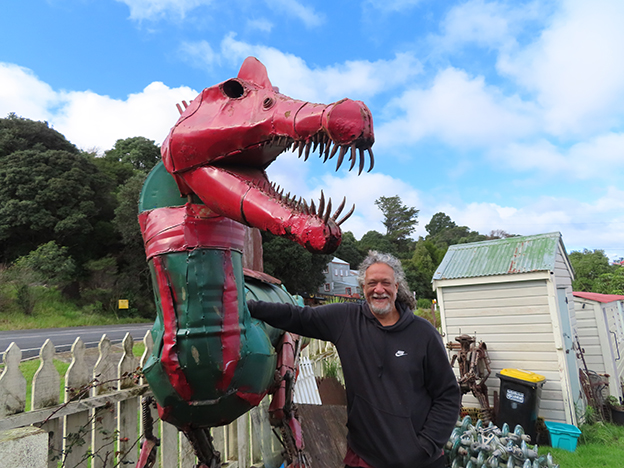 On the outskirts of Thames, you might be startled to see an extinct Spinosaurus from the Cretaceous era glaring out ferociously at passing cars.
Known affectionately as “Fugly”, this dinosaur, bigger and badder than Tyrannosaurus rex, is the work of metal artist Marti Wong, who recently moved to Thames.
Making art is in Marti’s DNA. From an early age he knew this was something he had to do – whether drawing, sketching and painting, and, throughout his career, he has experimented with carving, print-making, chalk pastels, wood burning and collaging. His primary love though is making fantastical imaginative creatures and objects from metal.
His metal work reflects the early inspiration Marti took from a rich pool of films and literature, in particular, he was exposed to the fantasy and the Sci Fi worlds of Star Wars, BattleStar Galactica, Lord of the Rings, 2000 AD Comics, Dungeons & Dragons and Star Trek to name a few. He is still drawn to the imaginative worlds of mythical beasts, chimaera, and the legends of Greek and Norse mythology, and it is their mythical creatures which are enjoyed by the people who love his art.
Marti’s early path to becoming a professional artist was not an easy one, but one full of twists and turns, setbacks and opportunities. The fact he achieved his dream of making art for a living is testament to the passion he feels about it as an important focus for life.
Marti said he dropped out of high school: “I was asked to leave for wagging, playing pool and listening to Pink Floyd”, and at his first flat, he hung out with other artists.
“We were experimenting with what was possible. Many of the people I hung out with have also gone on with art careers – in set design, movie making and writing,” he said.
After the reality of marrying and starting a family meant Marti had more responsibility, he decided to take a free government course in stainless steel welding, as he thought this would give him good future work options. Fortunately, next door was an automotive shop where he could get free machine parts to make art one day a week, using the gear provided by the course. He finished the one-year course in six months and, with the encouragement of his tutor, had the freedom for the next six months to make anything he wanted.
When the course wound down, Marti bought the equipment, which meant he could make art from a single garage at home and was on the way to fulfilling his dream.
He then got a job working with wrought iron but repetitive strain injury (RSI) meant he had to take time out for a year. Unable to make art, he helped raise his babies instead.
After he healed, Marti returned to making his own art and, in the late 1990s, he began to exhibit his work and attend shows such as the Ellerslie Flower Show, Mystery Creek and Sculpture on the Shore in Takapuna. As his work became recognised, he received both public and private commissions.
Moving to Thames was a new adventure for Marti. He is influenced now by his daily walks and inspired by the local natural environment – white faced herons, pohutukawa, tui, falcons, spoonbills and driftwood.
He and his family wanted to live in a community supportive of the arts and he’s already involved with two collaborative art projects – one at Te Puru School and the other with the Thames-Coromandel District Council’s Create the Vibe project in the heart of Thames.
For Marti Wong, making art is a way of being, and he could not imagine living another life other than one making art.
“I have worked and done jobs and done other things. It wasn’t satisfying. It’s soul destroying working for someone else. I am lucky and privileged. I have the skills and abilities and I have done this for 25 years”. By DEBORAH MACDONALD BROWN

Winter woollies to warm those in need