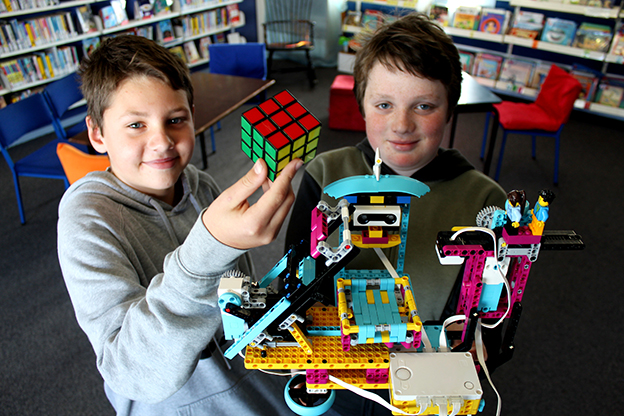 Liam Khudolyey, 11, and Ben Martin, 12, with the Ribik’s Cube-solving robot made out of Lego. Photo: KELLEY TANTAU

Two students from Turua Primary have created a robot out of Lego that can solve a Rubik’s Cube in less than five minutes.
Liam Khudolyey, 11, and Ben Martin, 12, were this year part of a Lego Robotics Extension Group at their school, and created the machine after three weeks of construction and 10 hours of programming. By using a Lego Mindstorms kit, and downloading instructions and code created by David Gilday from MindCuber, they were able to see their own robot in action.
“There’s an ultrasonic sensor that detects when you put the Rubik’s Cube in, and it starts scanning it with a colour sensor. After it has scanned all the sides, it will make algorithms for the motors to solve the Rubik’s Cube,” the boys explained.
The robotics class is new to Turua this year, and is led by teacher Estelle McCoid.
​​Whaea McCoid said she was proud of the boys for completing such a complicated task.
“We showed it in assembly,” the boys said.
“It was loud. Everybody was clapping.” By KELLEY TANTAU

‘Blown away’ by community support