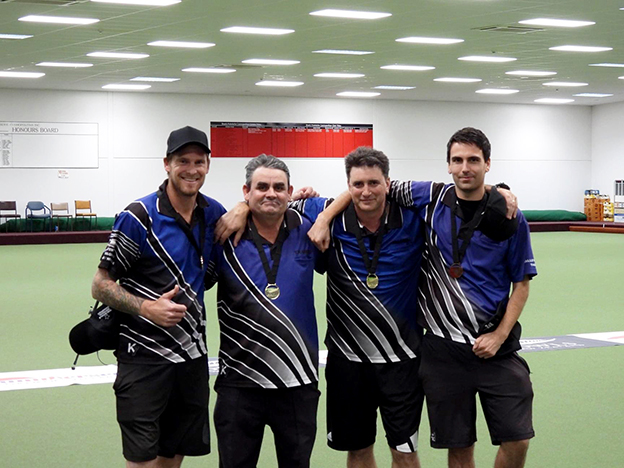 A Thames Bowling Club team has cruised into winning a national title despite only playing together a handful of times in the past year.
The team, representing Thames Valley, took out the National Champion of Champion Fours silverware for the 2020/21 season at Pukekohe recently.
The talented team, skipped by Adam Haywood, with Matt Johnson at number three, Jason Prout at number two, and lead Mark Mathews, combined to take on more than 40 of the country’s top performing sides at the event, which was hosted at the Pukekohe Cosmopolitan Club.
The men’s final saw the line-up take a comfortable grip on proceedings, holding back a strong charge from Northland to storm home to win the title 16-11.
The Thames team were thrilled to receive their medal and get a New Zealand title under the belt.
Adam Haywood, who lives in Whitianga, said the win came as a surprise considering the team hadn’t played together much in the past year.
He didn’t play bowls that much due to work and family commitments, and only played with his Thames-based teammates around 10 times a year, he said.
“I haven’t touched a bowl in three months then we went there and ended up winning. It’s a good team,” he said.
“One of our players [Jason Prout], he only plays twice a year too – he’s too busy fishing all the time.”
However, it was good for a small centre like Thames Bowling Club and for Thames Valley to win a national title, he said.
“I’ve come close a couple of times before but obviously fell short so I wasn’t expecting that. But a bit of belief in the team can go a long way sometimes,” he said.
“It’s a big deal. Some people play their whole lives and don’t get [a national title] so… we felt pretty good, we were pretty hungover the next day.”
The team members were looking forward to the new season, which was due to begin in a few months, he said.
“We’ll get back into playing centre events at different clubs around the Thames Valley, playing for centre titles and there’ll be club events.”
Bowls was a great sport for meeting different people, he said.
“It’s a pretty addictive game once you get the hang of it – because it’s quite hard, and playing in team format is good – you’re playing with your mates.” By TERESA RAMSEY

Netball umpiring appeared ‘out of the blue’ for Reefe