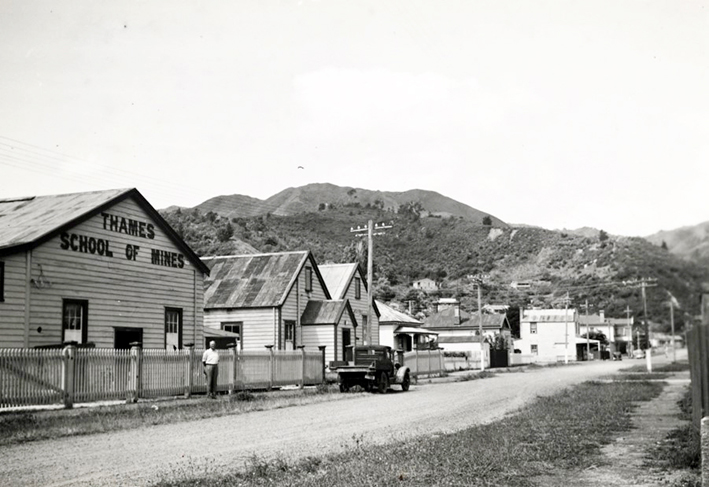 1905
The antics of an old lady, her donkey, and the local pound keeper provided some entertainment for the inhabitants of Paeroa. The pound keeper had seized the donkey on a charge of straying and was endeavouring to walk him to the public pound. Three road workmen came to his aid as the old lady appeared on the scene with a piece of bread in her hand. Eager for the bread, the donkey toppled his captors as if they were skittles in a bowling alley and trotted off with his mistress, to the mortification of the men and the amusement of the crowd.
Mr Wright, electrical instructor at the Thames School of Mines, received peculiar injuries to his hand while working with x-rays. The odd gradations of the injury were most perplexing and caused distressing symptoms. Mr Wright was granted six months leave of absence on full pay to enable him to proceed to England and have the injuries treated. Mr Wright’s case was believed to be the first case of its kind in Australasia. In a similar case, an assistant at the Edison laboratory had affected areas amputated. After consulting specialists, Mr Wright made a satisfactory recovery and showed great improvement during the voyage home. It was thought the injury would not affect the arm or body as was first feared.
A tennis team trip to Turua was hailed a great success by players from Paeroa. The team, accompanied by members of the Mandolin, Banjo, and Guitar Club, travelled to Turua by the steamship Taniwha. The remainder of the party went by a comfortably arranged barge towed by the Eliza. On landing, the party was welcomed to afternoon tea by the Turua Lawn Tennis Club. After play had ceased, the party adjourned to the wharf where more tea was partaken of. A concert commenced punctually at 7.30 and finished shortly after nine o’clock in order to leave while the tide was coming up the river. Just before leaving three hearty cheers, followed by ‘For They are Jolly Good Fellows’, were given for the Turua people. On the homeward journey songs were sung and some most excellent flute solos played. As they landed at the Puke wharf, three hearty cheers were given for Captain Adlum of the Taniwha. The Eliza, with the barge in tow, arrived at the wharf just after midnight, and the party was met by coaches, and conveyed to town.
While travelling on a coach, a very painful accident occurred to Mr Allan Kirkwood, of Karangahake. Mr Kirkwood was riding on the footboard in front of the coach, when just near a tunnel his foot slipped, and in trying to jump clear, he fell, the wheels passing over both legs. He was conveyed to Mr Verrall’s residence, and Dr Craig was soon in attendance. Mr Kirkwood had sustained such a bad break to his left leg that the doctor would not allow him to be moved. In a curious twist Mr Kirkwood was to have been married that afternoon to Miss Ruth Morton, of Mackaytown. The wedding was held, the unfortunate man being married in bed.

One man’s high-heeled walk for Hospice