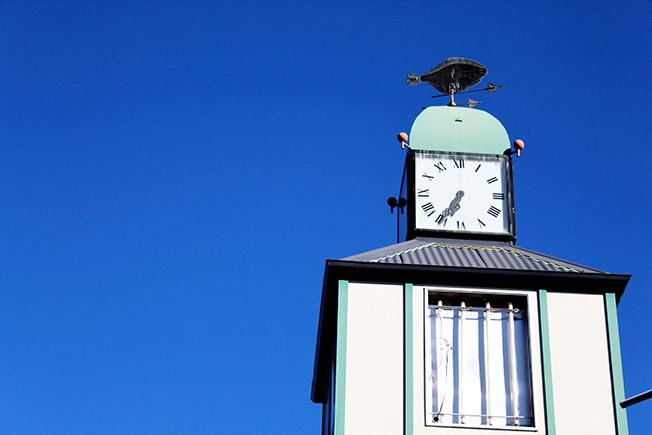 Time is standing still for the Thames town clock – and only time will tell when it will be back to its former glory. KELLEY TANTAU investigates.

A stopped town clock in Thames is ticking off people who think it’s well past time to get it fixed.
Time has stood still in the town for a few months, with the clock above the TPC building on the corner of Mary and Pollen Streets frozen at 6.35.
One commenter on social media believed once the clock was fixed, a “curse” will be lifted from the town, but Phil Green, the designated time keeper whose office sits below the broken clock, said the problem was much more ordinary than that.
“It’s been having problems for about 18 months, but it wasn’t too bad. We’d just come into the office and suddenly find that it had lost an hour. We’d advance it and it’d be fine for the next few weeks or months,” he told The Profile.
“Then it started getting worse and worse and worse.”
Mr Green is a shareholder at Dunwoodie and Green Surveyors. They’ve been in the building, what used to be the Thames-Coromandel District Council offices, since 1993.
“When the council owned it, it was controlled by a timepiece like a grandfather clock.
“That was starting to play up, so we had someone build an electronic controller for it, and we’ve run it off that for the past 30 years,” he said.
“Originally, it was pretty reliable. We hardly ever touched it apart from at daylight savings.”
Thames Star articles from the time raved about the clock being installed on April 8, 1968. The then-Mayor Wallace Brunton called it a “red letter day” – a day of special significance or opportunity.
The clock was a gift from the Thames Lions Club, and Mr Brunton said it was a “monument not only for the people of Thames, but a fitting memorial to the local club members whose efforts made the gift possible”.
Thames Lions Club president Mike Fury, speaking personally, said the clock was put there for a reason, and he would love for it to continue being of use to the public.
“As long as it’s needed in the town, I would be very pleased to see it restored,” he said. “And I think we would lose a landmark if we didn’t keep it going.”
Mr Green said they’d considered changing the clock to a digital display, but agreed the original time piece added character to the town.
“We stopped it at 6.30 because we figured that was going to be the best time for people. If we’d stopped it at 12 o’clock, people would have looked at it and thought: ‘It’s time for lunch’.”
They’ve sent the clock’s controller away to get fixed, but were waiting on parts from England, he said, so when it’ll return to its former glory, only time will tell.