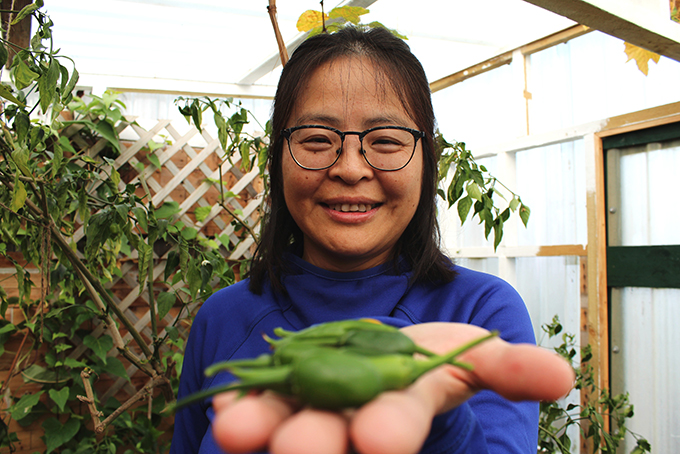 It was the chowing down on one of the world’s hottest chillies at a Ngatea barbecue festival that propelled Wei Zhang on to the national stage of spice.
Now, she’s been crowned the country’s second-best chilli-eater, and the competition’s top female competitor.
The Paeroa translator’s heat history is long-spanning.
Growing up in the Chinese province Jiangxi meant eating spicy foods was second nature.
“In China, there are basically three provinces famous for their spicy foods, and my home province is one of them,” she says. “If you grew up there and didn’t eat spicy food, people would think you were strange. It’s probably like if you grew up in New Zealand and didn’t like fish and chips.”
Wei grows her own chillies – her greenhouse was built around her jalapeno plant – and often asks Indian or Thai restaurants to cook her meal “as spicy as you can”.
“And they always want to double check: ‘Are you sure, are you sure?’”
So when Ngatea local Adam Matete organised Hauraki Plains’ first Up in Smoke barbecue festival earlier this year and included a chilli-eating competition, Wei’s love for spicy food saw her enter.
She had never entered a chilli-eating competition before but despite that, she won.
It was her impressive polishing off of a Carolina Reaper chilli that qualified her to enter the NZ Chilli Eating Champs in Auckland last month, where competition was fierce.
“We were given different kinds of chillies, from mild to hot, and we were required to chew the chilli for 30 seconds and then swallow the whole thing except the stalk,” Wei says. “Then, we waited another four minutes before being served another, hotter, chilli.”
Wei’s lips began to burn after eating another Carolina Reaper, but still, there was more to come. “Because the contestants were so good, even the Carolina Reaper couldn’t knock out many people, so the organiser decided to serve ‘chilli kebabs’ – just four chillis on one toothpick.” By the final round, Wei and the eventual champion had already eaten 40 chillies each.
“In the last round, we were going to have to eat 10 of the hottest chillies in the world, and at that stage I thought: ‘I don’t really want to throw up in front of so many people’.”
Wei said she thoroughly enjoyed the event, and while she wouldn’t pursue chilli-eating as a talent per se, she would love to participate in more events, and to see more females giving it a go. “It does require practice,” she says. “But the more you eat spicy foods, the spicier you can get.” By KELLEY TANTAU