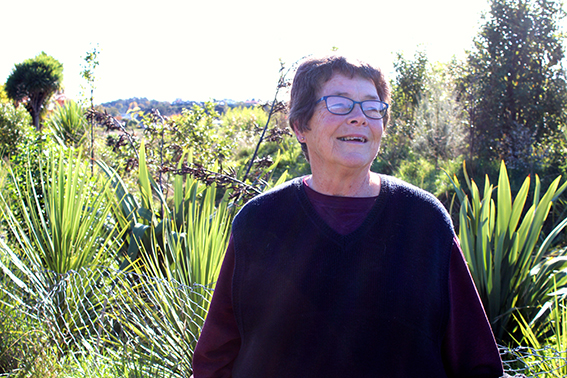 An old tip site in the Paeroa suburbs is unrecognisable now that its concrete, rubber, and wire has been replaced with manuka, flax, and totora.
What now resides on the corner of Arangi and Ainslie Rds is a pocket of native bush, and its transformation is owed to volunteers from the Paeroa Streamcare Trust.
The trust was set up in 2017 with the goal to reverse the man-made damage to the streams from chemicals and refuse.
Its members have been hard at work at the Aorangi stream – the location of which was once a “tip site”, Dr Mairi Jay told The Profile.
“They just threw everything in… concrete, rubber, fabric, wire, backpacks, and personal items.
“It’s been very hard work, but it is starting to look like it’s cared for, which is nice.”
The group has also been working at the Aorangi Millennium Forest, which was planted at the beginning of 2000 by students from all of Paeroa’s schools.
Dr Jay says the trees have grown, but so have the weeds.
“The trees that they planted are quite big and have formed a canopy, and under the canopy, we can now put in natives like kawakawa that like the shade.
“This year, we’re inviting all those schools [that originally took part] back again.”
The group has planned a three-day planting of around 350 native trees and shrubs at Aorangi Millennium Forest from June 3-5 with the intention to “take back the forest from the weeds”.
It’s a mission close to Dr Jay’s heart.
“I spent my college years in Canada and my childhood in Kenya, and when I came to New Zealand in my 30s, my rellies took me to the Waitākeres, and I was blown away,” she says.
“It was completely unlike anything in Canada or Kenya, and I think if you’re born and brought up in New Zealand, you don’t realise how really unusual its native plants are.”
Dr Jay says she soon came to realise how “damaged” a lot of the countryside was. She wondered where all the native birds were, and, after visiting Tiritiri Matangi Island in the Hauraki Gulf, she realised: “They’re here”.
Her goal is now to bring native flora and fauna back to Paeroa, with the work at Aorangi Stream a great starting point.
“I hope I’ll one day be able to see all of the kahikatea, and the totara, and the tanekaha.”
DETAILS: Paeroa Aorangi Millennium Forest planting, June 3-5. Signs will be out on Aorangi Rd and Shaw Ave. Find Paeroa Streamcare on Facebook for any changes on the day. Schools welcome, Ph: 07 820 2699, email: mairimacintyre@gmail.com.