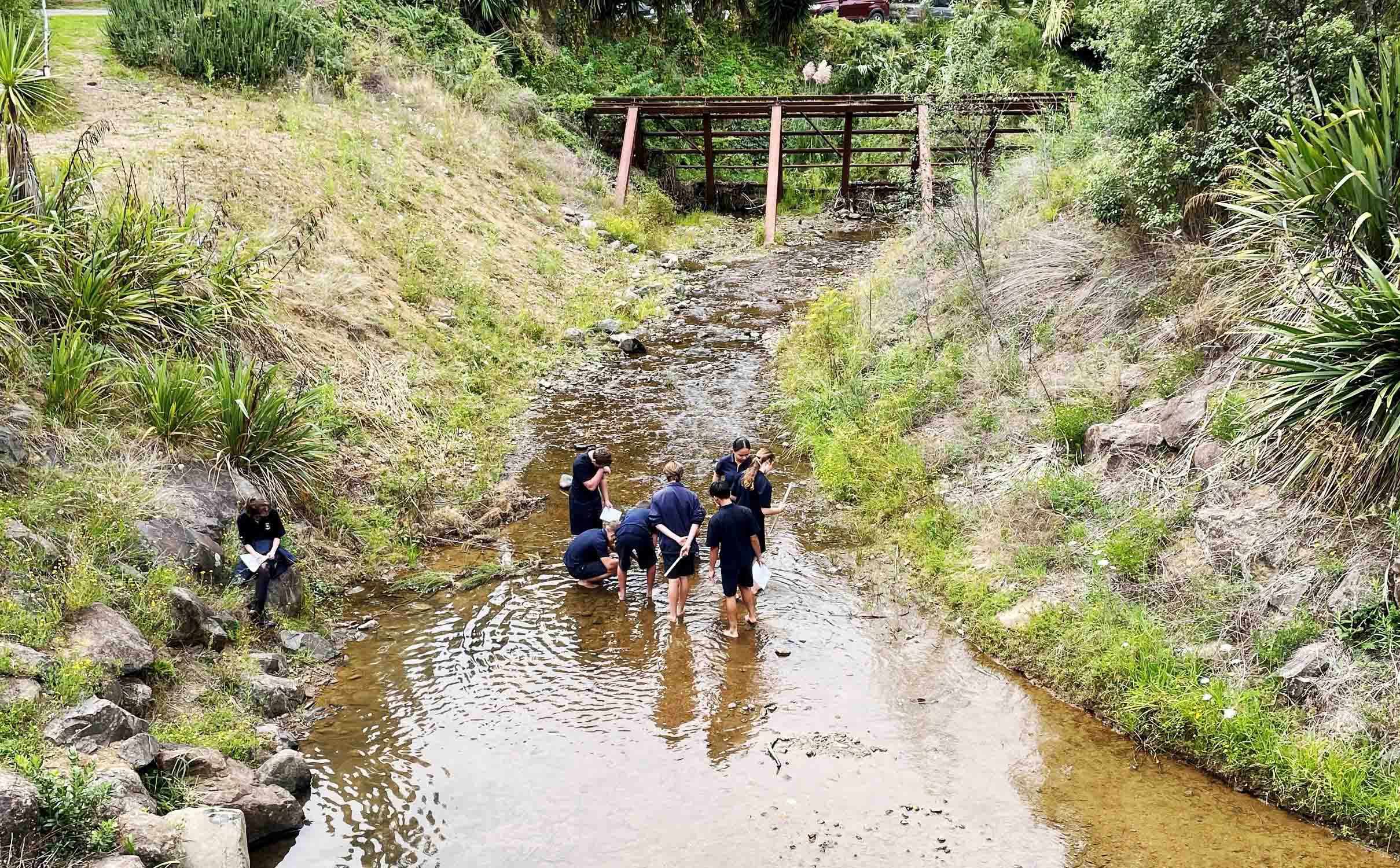 Thames High School students work in the Karaka Stream, which was the site of a pilot eDNA test. Photo: SUPPLIED

Worms, freshwater jellyfish, pigs, cats, and humans have all shown up in DNA results pulled from a Thames stream.
What wasn’t found was any evidence New Zealand native fish kōkopu and kōaro existed in the sample area, surprising a local conservationist.
To encourage citizen science, The Environmental Protection Agency (EPA) have sponsored Environmental DNA (eDNA) kits around the country.
NZ Landcare Trust Waikato catchments co-ordinator Ric Balfour has 10 of these kits, worth $200 a pop.
He will be working with catchment groups and landowners across the Coromandel, Hauraki and Matamata-Piako to discover what is present and absent in their streams.
“You collect the water sample with a syringe, squeeze it through a filter which traps the fragments of DNA, and then you run about 4-5 litres [of water] through it.
“That gets bagged up and sent to Wilderlab in Wellington, and they take 2-3 weeks to analyse it,” Mr Balfour said.
From a pilot test taken with the help of Thames High School students at Karaka Stream, eDNA results showed 193 fragments of oligochaete worm; 153 fragments of longfin eel; 116 fragments of torrentfish; and 104 fragments of freshwater jellyfish. There were also 71 fragments of human DNA, and eight each of dog, cat, and pig.
What the results did not produce was any evidence that any galaxiidae or small freshwater fish, such as kōkopu, was present in the Karaka Stream, which Mr Balfour expressed shock at.
“They should be there, and that really stood out for me,” he said.
“I have detected them in Tararu Stream and I know they’re in the Kauaeranga, so what that means is by having that big structure that was downstream of the [Karaka Stream] sample site, I suspect that inanga, or whitebait, which are the young of kōkopu, haven’t been able to get up there.”
The sample was taken at the end of Bella St, upstream from Thames Hospital, and gathered information from up to 1km, Mr Balfour said.
Another surprising result from the pilot was the presence of torrentfish (panoko) and bullies, such as toitoi, as well as blackbirds and house sparrows, of which there were 37 and 11 fragments found, respectively.
Their presence in the stream could be determined by a drop of a feather, Mr Balfour said.
“This is a very exciting new tool that’s going to be available as part of water quality monitoring, and you just wouldn’t be able to find half of these species by the normal techniques of fishing with a net or picking up rocks.
“This is a whole new level,” he said.