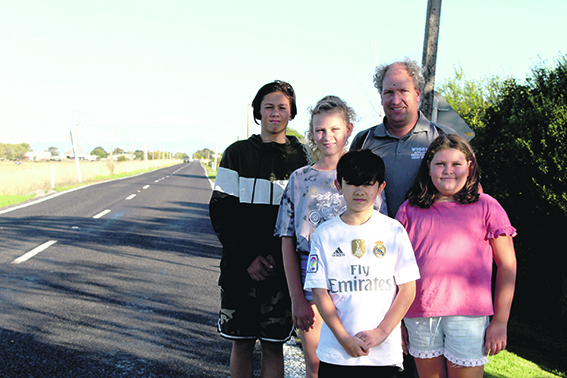 Hauraki parents have called a public meeting with the Ministry of Education over “dangerous changes” to college bus routes that would see children walking on some of the region’s most deadly state highways.
The meeting, which was planned for Tuesday morning, was called to bring affected families, school representatives, and a ministry spokesperson from Wellington together to discuss the Term 2 changes to eight bus routes transporting students to Hauraki Plains College and some primary schools.
According to the ministry, one of the route changes, Orongo/Pipiroa, will see bus stops moved to allow students “ineligible” for transport to Hauraki Plains College become eligible.
However, the proposed change means students will have to walk along State Highway 25, a busy main highway with no footpaths, to get to the new bus stops.
Parents Karma Vitasovich, Lisa Wiggins, and Angela Jolly said the changes were “dangerous” and would impact on students’ safety, attendance, and achievement.
Mrs Jolly, a mother of two college students, said her children would have to walk along SH25 towards Bugger Cafe to the new bus stop. To be worried was an understatement, she said.
“It’s dangerous at the best of times, and this is just asking for kids to be killed. It doesn’t make any sense.”
In a letter to the ministry, Ms Vitasovich said some of the kids “weren’t even old enough to be left alone at home, let alone roadside on one of the most dangerous highways in New Zealand”.
“Not to mention,” she said, “at some stops, the students will have no choice but to stand on the actual road itself. We also have students with limited eyesight – [being] roadside without supervision is not an option for them.”
A recent Valley Profile investigation into our roads found SH25, from the SH2 roundabout to Kōpū, had seven fatal crashes over the past five years.
“It’s an absolute safety hazard. It doesn’t matter what way you put it,” Mrs Jolly said.
“I walk to our fenceline in the paddock and it scares me, and that’s just because there’s people hooning past, let alone walking along the road with no verge, and they’re wanting kids to do that?”
Ministry head of education infrastructure service Kim Shannon told The Profile the ministry allocated services and funds based on those students most in need of transport assistance, and in line with the school transport eligibility criteria.
College principal Ngaire Harris said parents’ frustrations around the changes was “totally understandable and justifiable”, especially around student safety on main highways, the cancellation of long-standing bus pick ups, and the challenges of organising transport to pick-up points.
“There are enough challenges about living rurally; cutting back on bus services is adding another layer to that challenge,” she said.