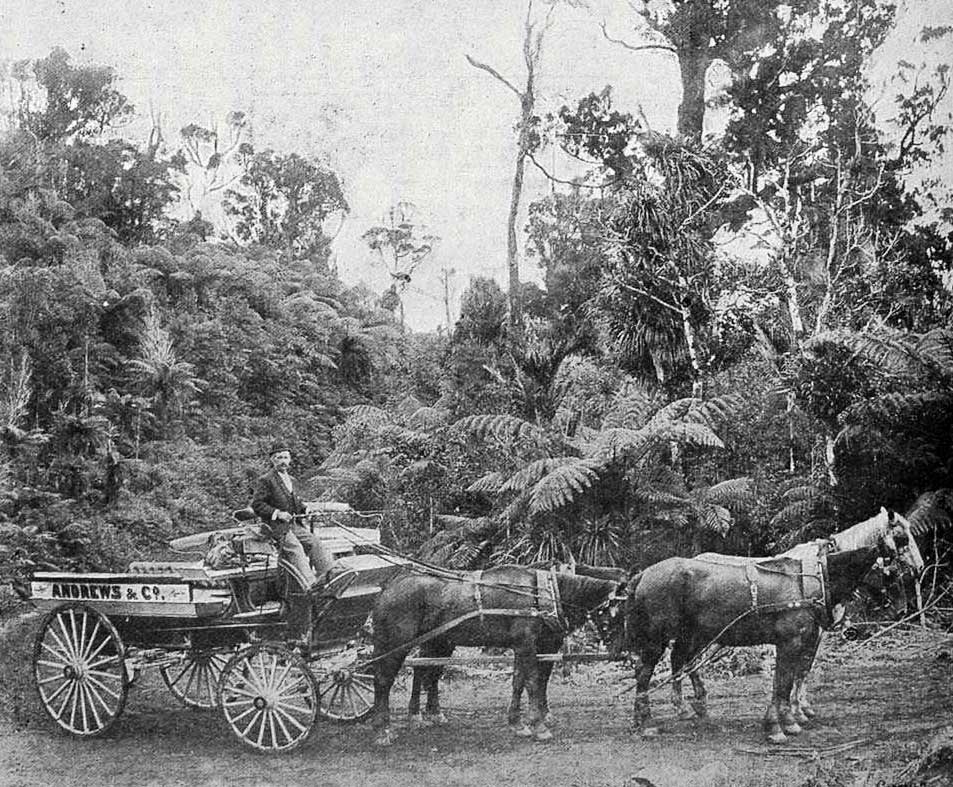 It was all bandsman John Hill could do to keep the prickles of akeake and ti-tree off his drum as the four-horse brake he was riding on moved past thick scrub bordering the rough road. It was the end of race day at Te Aroha in March 1911 and the brake containing the bandsmen was travelling at an easy pace, having just come through the gate when it abruptly pulled up short.
A man had suddenly stepped out of the ti-tree, was knocked down by one of the lead horses. J S Crickett, on the back of the brake, jumped off and tried to get the man out. He called to the driver to pull off, which was done and the man freed.
Dr Kenny was just leaving the racecourse when people started calling him to come to an accident on the road. He found a man lying on his back but nothing could be done for him. A passing car was requisitioned to take the body into the township where it was placed in a room at the Grand Hotel. The unfortunate man was 65 year old Irishman Bernard ‘Barney’ McGeehan from Mackaytown. At the inquest Joseph Boles, draper’s assistant, who was in a car at the time of the accident and passing the brake in the opposite direction, said he noticed a man right in front of the horses and sang out to him, but he was struck immediately after. The driver could not have pulled up any quicker than he did. The sun was setting and would have been right in his eyes. A Johnson, driver of the brake, said there was no-one on the road when he passed through the gate. The man just appeared out of the ti-tree.
The vehicle had a handbrake and he had to change the reins to his left hand before he could use it. During the inquest the jury asked to go to the scene of the accident and a brake was obtained for their inspection.Resuming the inquest, William Hodgson, farmer and contractor of Waihou, stated he was in charge of the gate at the course leading on to the road. He considered the road dangerous and overgrown with scrub. He had known the driver for many years as a good and careful whip. He had seen Bernard on the roadway just in front of the horses but he did not see how he came to be there. The harness used was mostly old and it would have been difficult for anyone to hear a vehicle coming before it was on him.
The jury found Bernard met his death by being accidentally run over by a four in hand brake and no blame was attachable to anyone. They strongly recommend the Piako County Council have the road on which the accident occurred cleared of all scrub and formed to the full width – if this had been done the accident would probably not have occurred.
Bernard was buried at Paeroa’s Pukerimu cemetery.
He had several relatives in Auckland, and others who had known Bernard during his life’s travels were advised of his death in a newspaper notice which read “County Donegal and West Coast papers please copy”.
Bernard appeared to have had a good day at the races – over £47 was found in the pockets of his clothes – until his luck ran out.

PHOTO: A Mackaytown man was killed by a brake and four. Photo: SUPPLIED