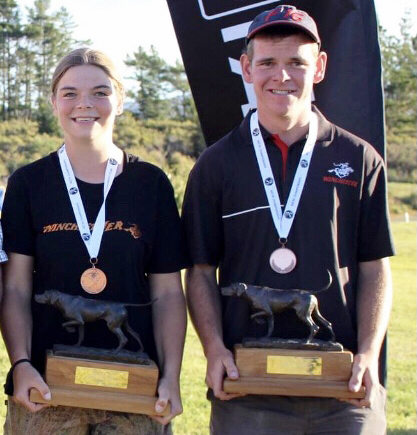 It’s a family affair when Andrew, Graham, and Ashling Welch step on to the shooting range.
As competitive clay target shooters, there’s a dose of friendly rivalry when they’re up on the mark, but for the Waitakaruru family, being able to participate in a sport side-by-side was “a lot of fun”.
“It’s a fantastic sport. It’s something that we can all line-up for and compete against one another each time we go,” dad Andrew Welch said.
As a duck hunter, Andrew started the sport of clay target shooting after years of racing motorbikes left him with a few injuries.
Now, he says his children are shooting better than he is.
The family attended the NZ Sporting Clay Target Shooting National Championship at Greymouth on February 20-21.
Ashling, 16, won the NZ ladies championship and placed third in the NZ Juniors (under 21 years old). Graham placed first in the A Grade and won the NZ Junior title.
Graham and Andrew were also in the North Island mixed team which came first.
“Graham beat me at the nationals. I don’t like losing to him, but I’m pretty proud to see them up on the podium,” Andrew said.
Clay target shooting is a sport involving shooting a firearm at flying targets known as clay pigeons, or clay targets.
The Welch family are all members of the Thames Clay Target Club, which has become a second home.
“I would have been going to watch dad shoot since I was about eight, and when I was 10, I got a gun for Christmas… the rest was history,” Graham said.
For his sister Ashling, 16, it was quite the opposite.
“I didn’t like Graham and dad talking about shooting all the time and I would get very bored watching them shoot, but about two years ago I decided I wanted to give it a go and then it became more fun,” she said.
The family will be at the Oceanias at Rotorua come April, and encourage people to get involved with the sport. The Thames Clay Target Club can be found on Facebook.